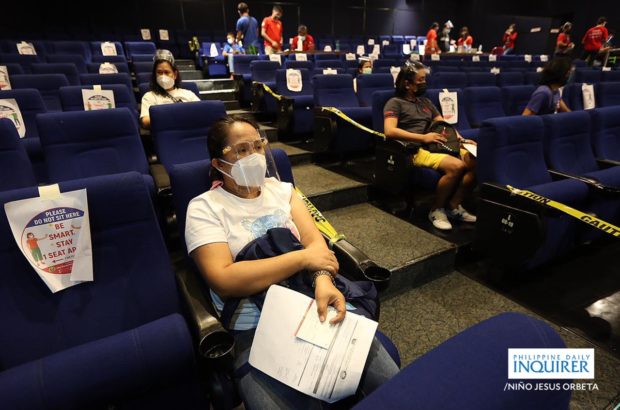 A mall in Greenhills, San Juan served as a vaccination site for those in the A4 category, or the essential workers. NIÑO JESUS ORBETA/PHILIPPINE DAILY INQUIRER

MANILA, Philippines — Malacañang on Monday said there is “absolutely no deception” in the government’s reporting of COVID-19 vaccination figures to the public.

Earlier, Malacañang released a graph showing that the Philippines was second among Southeast Asian nations in the number of vaccine doses administered.

“It’s just two ways of looking at the numbers. One is absolute numbers and we remain second, there is no deception,” presidential spokesperson Harry Roque said in a Palace briefing.

“Another is a percentage number, which depends on your population… There’s absolutely no deception when you use absolute numbers. Katotohanan lang po,” he added.

A May 22 vaccination ranking from Our World in Data project of the prestigious University of Oxford showed that the Philippines did have the second highest number of COVID-19 vaccine doses to administer among its regional peers.

However, the Philippines was ranked 9th among Southeast Asian countries in terms of the coverage of its vaccination program.

Data from the Our World in Data project showed that the Philippines has given the first vaccine dose to 3.20 percent, and fully vaccinated just 1.00 percent of its targeted populations as of May 27.

As of June 12, Roque said over 6.87 million vaccine doses have been administered. Over 5 million have received their first dose while more than 1.85 million are already fully vaccinated.

Testing czar Vince Dizon defended the government’s vaccination rollout, saying the pace of inoculating the population depends on the delivery of doses to the country.

More than 9.3 million COVID-19 vaccine doses have so far arrived in the country, figures presented by Malacañang showed.

“There is a global supply problem but what the government has shown is that when the supply comes we use it to vaccinate as fast and as many of our countrymen as possible,” Dizon said in the same briefing.

“When we show absolute numbers, there is no deception there, [Sec. Roque] is absolutely correct, we are just stating a fact. We are getting vaccines as fast as we can,” he added.

“[Vaccine czar] Sec. [Carlito] Galvez is working very hard to bring the vaccines into the country, as soon as they arrive, we will vaccinate as fast and as many as our countrymen and women as we possibly can,” he further said.