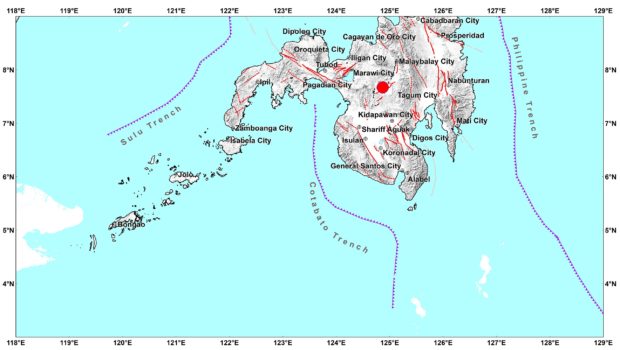 CAGAYAN DE ORO CITY, Misamis Oriental, Philippines — Many people here were roused from their sleep at past 10 p.m. on Monday, June 14, by a strong quake that also jolted other areas of Mindanao.

The quake, which is tectonic in origin, struck Kadingilan town in Bukidnon province at around 10:38 p.m. It had a depth of focus of only 8 kilometers, according to the Philipine Institute of Volcanology and Seismology (Phivolcs).

It was felt at Intensity V in Kadingilan town and was measured in the instruments at Intensity III in Cagayan de Oro and Gingoog cities in Misamis Oriental, and Kidapawan City in Cotabato province, and Intensity II in Koronadal City in South Cotabato.

The quake was also felt in the cities of Davao, Cotabato, Iligan, Butuan and Ozamiz.

Phivolcs said that damage is expected from the tremor.

Three aftershocks were felt in Cagayan de Oro City. The Phivolcs recorded a magnitude 5 tremor at around 10:49 p.m., also in Kadingilan.