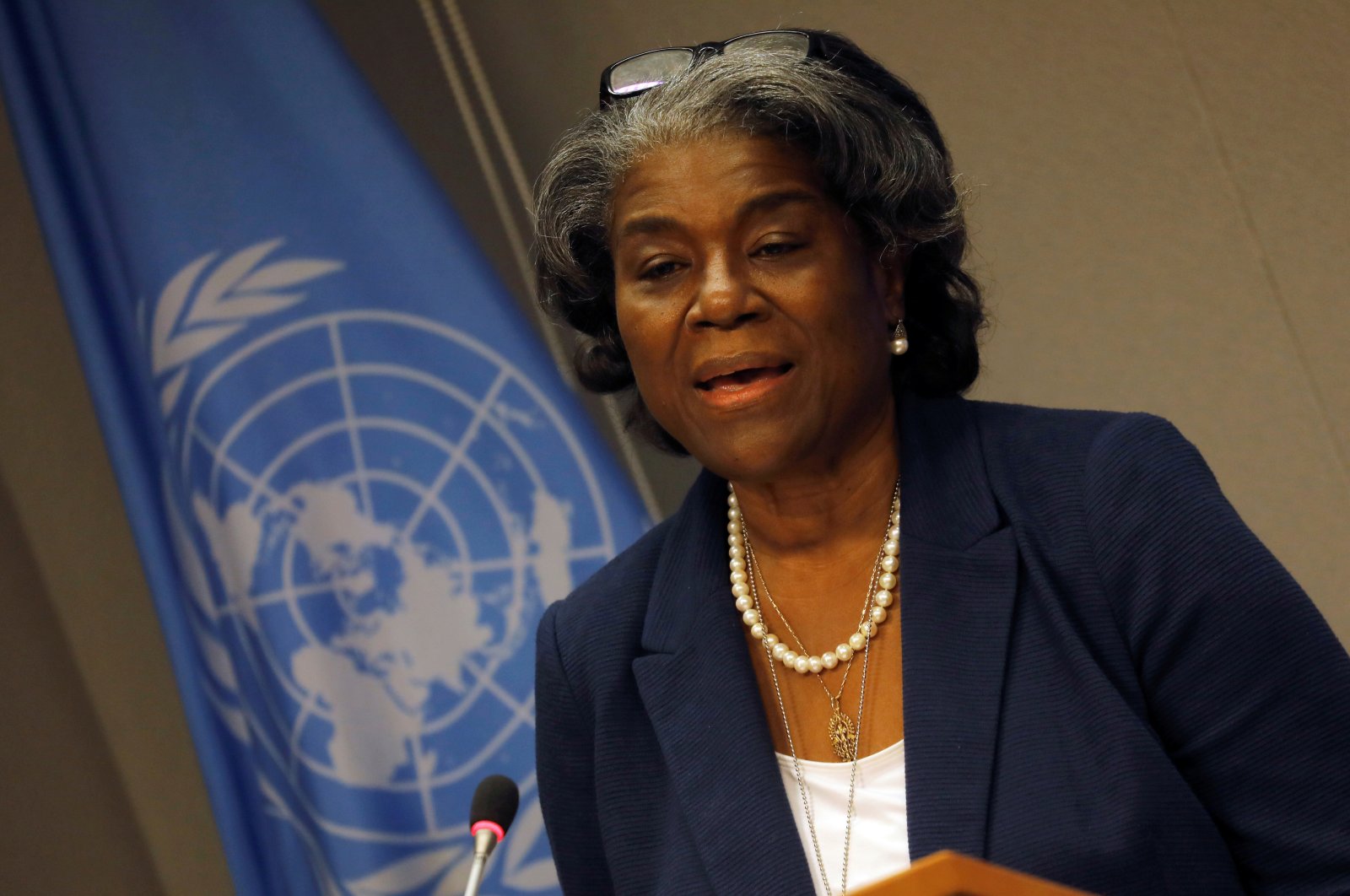 The United States Ambassador to the United Nations, Linda Thomas-Greenfield, arrived in Turkey to meet with top officials this week to discuss the “dire humanitarian needs in Syria,” the cooperation on Syria, the U.S.-Turkey relationship and global challenges.

The envoy headed to Turkey late Tuesday seeking to ensure that humanitarian aid can be delivered to Syria across borders, a program Russia has severely limited in recent years while insisting the Syrian regime should control all assistance to millions in need.

During her visit to Turkey from Wednesday to Friday, Thomas-Greenfield will meet with senior Turkish officials, United Nations agencies, aid groups and Syrian refugees, said senior officials with the U.S. mission to the U.N.

The trip will “focus on the extensive support provided by the United Nations and its partner agencies to meet the dire humanitarian needs in Syria,” it said in a statement. The envoy will also visit the Turkey-Syria border this week ahead of a likely showdown with Russia in the U.N. Security Council over the extension of a cross-border humanitarian aid operation.

Thomas-Greenfield’s visit comes ahead of the July 10 expiration of the U.N. Security Council mandate for humanitarian aid deliveries, now reduced from four initial international crossing points to a single border crossing from Turkey to Syria’s opposition-held northwest at the insistence of Russia, the Syrian regime’s closest ally.

Thomas-Greenfield will “convey the United States’ strong support for humanitarian access into Syria and the U.S. commitment to the people of Syria,” said one U.S. official.

“The Ambassador will meet with senior Turkish officials to discuss opportunities to strengthen the U.S.-Turkey relationship; work with our NATO ally to address global challenges; improve cooperation on Syria, including managing the refugee crisis; and recognize Turkey’s crucial role in the facilitation of cross-border assistance and work to welcome and provide refuge to millions of Syrian refugees,” the mission said in the statement.

“Ambassador Thomas-Greenfield will emphasize the urgent need for additional crossings and stepped-up international assistance, as there is no viable alternative to alleviate the vast needs of vulnerable populations in northern Syria – needs that have only been exacerbated by the COVID-19 pandemic,” it added.

“Nothing could be more urgent than continuing to provide life-saving aid through the cross-border mechanism … This has grown even more significant and more dire,” the U.S. official said.

The 15-member Security Council first authorized a cross-border aid operation into Syria in 2014 at four points. Last year, it reduced that access to one crossing point at Russia’s insistence.

Another showdown is likely over the renewal of the mandate for the operation, which expires on July 10. A resolution to extend council approval needs nine votes in favor and no veto from any of the five permanent members Russia, China, the United States, France and Britain.

Several council members, including the United States, are pushing to expand the cross-border operation and increase the number of cross-border aid access points.

“Nothing else can deliver the amount of aid in the frequency needed to support vulnerable populations in northern Syria,” said the U.S. official.

U.N. aid chief Mark Lowcock appealed to the Security Council last week not to cut a cross-border aid “lifeline” to some 3 million Syrians in the country’s north as Russia questioned the importance of the operation.

Lowcock previously stressed the importance of keeping the crossing from Turkey to Syria’s northwest open for an additional 12 months.

“We want to see both more cross-line and more cross-border assistance. The cross-border operation – which is a lifeline for more than 3 million people – cannot be substituted,” Lowcock told the council. “We look to this council to ensure that that lifeline is not severed.”

The U.N. special envoy for Syria, Geir Pedersen, also told the Security Council last week it is “a tragic irony” that ordinary Syrians are facing “immense and growing humanitarian suffering” at this time of relative calm in the more than 10-year conflict.

The U.S. and many other countries had argued for restoring the Al-Yaroubiya crossing point from Iraq in the northeast that was closed in January 2020. It had been a primary delivery point for health and medical supplies, especially needed during the COVID-19 pandemic. But Russia argued that aid should be delivered from within Syria across conflict lines, and threatened to veto more than one crossing point.

Estonia’s U.N. ambassador, Sven Jurgenson, who took over the council presidency Tuesday, indicated at a news conference that Russia is already being difficult.

“The talks are starting already,” he said. “At one of the last meetings, we’ve heard that one of the members is planning to make things difficult again, as they’ve usually done.”

Jurgenson said past negotiations show that “at the very end they give in, but they want to cut off something.”