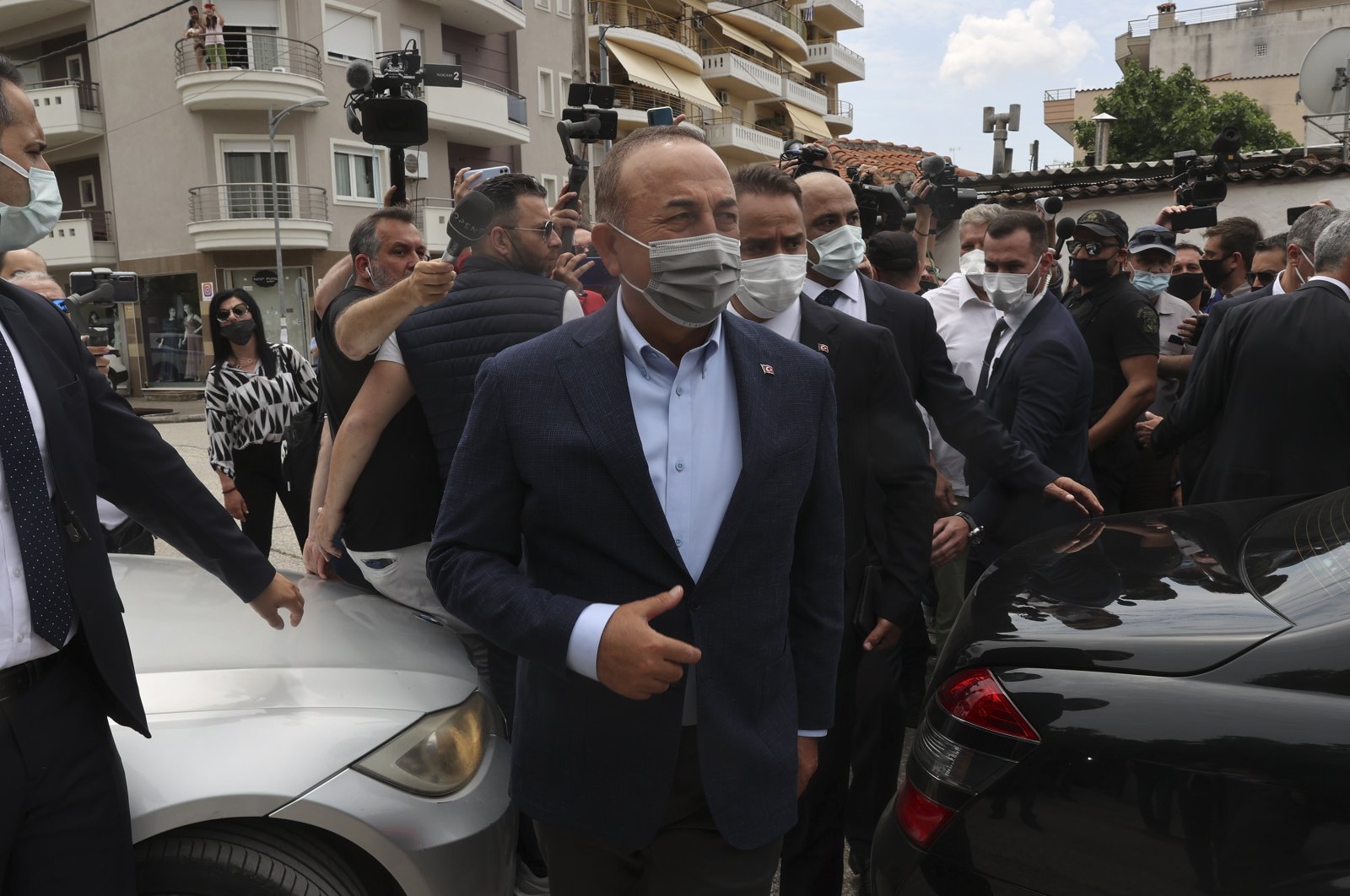 Foreign Minister Mevlüt Çavuşoğlu on Sunday departed for a two-day visit to neighboring Greece intent on setting a positive agenda amid tensions over disagreements on the Eastern Mediterranean, the Cyprus issue and the rights of the Turkish minority in Western Thrace.

“In Greece to meet members of Turkish Minority in Western Thrace and discuss our bilateral relations,” Çavuşoğlu tweeted on Sunday upon his arrival.

Çavuşoğlu, who made the trip upon the invitation of Greek Foreign Minister Nikos Dendias, will have dinner with Dendias on Sunday evening.

Speaking to journalists, the top diplomat underlined that Turkey aims to set a positive agenda and that he will meet with Greek Prime Minister Kyriakos Mitsotakis on Monday.

On the first day of the official visit, Çavuşoğlu met with representatives of the Turkish community in Western Thrace’s Xanthi (Iskeçe) and Komotini (Gümülcine), where he visited the consul general.

During his meeting with muftis of the Turkish community in the region, Çavuşoğlu was briefed about the situation of the Turkish-Muslim minority in Greece.

In a Twitter message, the top diplomat said: “The work of the Muftis contributes greatly to the preservation and strengthening of the unity and solidarity of the Turkish Minority.”

After the meeting, Çavuşoğlu visited a Turkish school, villages and local community in the region and spoke with the Turkish community.

After his visit to Celal Bayar High School, one of the two Turkish Minority High Schools in Western Thrace, he said: “Turkish Minority’s children of all ages having an education in better conditions and in their mother tongue is important. Will continue to support our kinsmen to solve these problems.”

Çavuşoğlu also met with the members of the Western Thrace Turkish Minority Advisory Board. The top diplomat emphasized that Turkey will always stand resolutely with the Turkish minority in their struggle for their rights and underlined once again its strong support.

Although Çavuşoğlu’s visit aims to establish a positive agenda, the Greek media has criticized his decision to visit the region of Western Thrace before Athens, claiming the itinerary is “a cause of tension before the official visit.”

After the escalation of tensions last year, the two have sought to gradually improve ties and Dendias visited Turkey in mid-April for talks with Çavuşoğlu.

During Dendias’ visit to Turkey, the foreign ministers held a joint press conference. The press conference began with conciliatory remarks from Çavuşoğlu, who praised “the very positive dialogue” the two just had in the Turkish capital. But the Greek foreign minister used his opening remarks to rattle off a series of long-standing complaints about Turkey – including its search for natural gas in the Eastern Mediterranean, its treatment of the Greek Orthodox minority and the two sides’ ongoing dispute about migrants.

On the other hand, Mitsotakis on Friday stated that Athens seeks to improve ties with Turkey.

Çavuşoğlu and Dendias are expected to hold a press conference in Athens on Monday.

Tensions stemming from the issue of the Turkish community in Western Thrace rose once again when Mitsotakis, during a videoconference on May 18, referred to the village of Pasevik as “Pomakohoria” (a Pomak village) and Turkish minority children as “Ellinopula” meaning “Greek children.”

The Western Thrace Turkish Minority Advisor Board condemned the statements saying, “We see this attitude as a denial of our legitimate identity against the demands of the minority. We call on the (Greek) government to abandon such imposing policies and to be more constructive about the freedom of expression of the minority.”

The Turkish Foreign Ministry also invited Greece “to end the denial of the Turkish identity of our kinsmen living in Greece and to implement the ECtHR (European Court of Human Rights) rulings in this direction.”

It is estimated that there are between 100,000 and 150,000 members of the Turkish community in Western Thrace. The rights of the Turks in the region were guaranteed under the 1923 Treaty of Lausanne, a pact forged in the aftermath of the Turkish War of Independence following World War I. Since then, however, the situation has steadily deteriorated.

After a Greek military junta came to power in 1967, the minority community was subject to more severe persecution and rights abuses by the state. Following Turkey’s 1974 peace operation in Cyprus to protect Turkish Cypriots on the island, the Greek military junta eventually fell, but tight restrictions on the minority group persisted and tightened. the early 1990s, certain rights of the Turkish community on the island were partially restored but issues regarding collective and civil liberties remained intact as new challenges emerged.

Within the scope of bilateral ties between the two countries, Çavuşoğlu is expected to make clear that Greece’s policies violate international agreements, including the Treaty of Lausanne, while drawing attention to the problems faced by the Turkish community in Western Thrace as well as the mistreatment of asylum-seekers attempting to reach Greece from Turkey.

The issue of Greece refusing to return fugitive members of the PKK and Gülenist Terror Group (FETÖ) is also expected to feature on the agenda of both countries.

One of the greatest sources of contention between the two NATO allies is a disagreement over rights in the Eastern Mediterranean, including the extent of air and maritime boundaries in the Aegean Sea and the future of the divided of Cyprus. Turkey and the Turkish Cypriots have ruled out discussing a federal system to reunify the island and insist that a two-state accord is the only way forward.