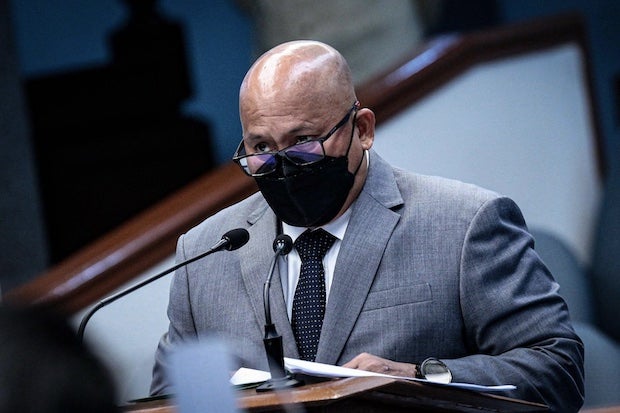 Sen. Richard Gordon warned, however, of “disastrous consequences” if the instructions to state forces were to be misinterpreted.

“Even if he did not intend to inflict harm or death, he would still be liable,” Gordon also said.

The issue was raised during Tuesday’s plenary session at the Senate as it tackled the report of the defense committee on its red-tagging investigation.

“Personally, when I receive orders coming from the president when he was then the mayor, first and foremost, my basic foundation there is that  I know he’s a lawyer… He won’t give orders that are illegal,”  Dela Rosa, who was Duterte’s first Philippine National Police (PNP) chief, said, speaking partly in Filipino.

According to him, the president just issues “hyperbolic” pronouncements to give emphasis to his orders and to indicate that “he really means business.”

“But he’s not saying: ‘Do what’s illegal as long as you can carry out my orders.’ I know he means well, and he means that all that he wants to happen should be legal,” he added.

Dela Rosa said this after Sen. Panfilo Lacson, chairperson of the Senate defense panel, called him over to explain how he would interpret orders coming from the president.

“Your name has been dragged into the discussion,” Senate President Vicente Sotto III commented in jest before Dela Rosa spoke.

Lacson, who was also a former PNP chief, was being interpellated by Gordon over the defense panel’s red-tagging probe report. Gordon expressed concern that the president’s “kill, kill, kill” order could be misinterpreted.

“I worry because in the papers today and the last couple of days there were nine of our countrymen killed in the Calabarzon area and six were arrested in a crackdown on activists,” Gordon said.

“Now, why the hell are we cracking down on activists? What’s bad about this is that timing: [It happened] two days after President Duterte ordered the police and the soldiers to kill and finish off communist rebels in encounters,” he added.

With such an order being issued by the president, Lacson said it would be up to ground commanders or middle-level officers to “exercise sound discretion.”

“Whenever the president, with all his bravado — as we know, the president would say ‘kill, kill, kill,’ ‘shoot to kill,’ but it’s not really what he meant — we would hear the president clarifying himself — but after the damage has already been done,” Lacson said.

“It’s incumbent upon the middle-level officers or even the high-ranking officers to interpret soundly or with discretion the orders being dished out by the president,” he added.

It was at this point that Lacson asked Dela Rosa to explain his perspective on how to interpret the president’s pronouncements or instructions.

“I think we can hear from him how to interpret the instructions of the president. Because you [addressing Gordon] and I did not have the opportunity to serve under President Duterte, and here’s a person who can more or less interpret more accurately than we can,” Lacson said.

“I hope everybody had the experience of Senator Dela Rosa that they can interpret. But on the field, sometimes you cannot look at the crystal ball and say this is what he [Duterte] really intended,” Gordon said.

“The problem is the misinterpretation could lead to disastrous consequences… My worry is, if the commander-in-chief says something, there’s no room for interpretation and he must be clear,” he further said.

Nevertheless, presidential spokesperson Harry Roque said the death of the activists should be investigated since they were “unarmed.”

Even the human rights body of the United Nations recently said it was “appalled” by the killings.

“We are deeply worried that these latest killings indicate an escalation in violence, intimidation, harassment, and ‘Red-tagging’ of human rights defenders,” Ravina Shamdasani, a spokeswoman for the Office of the High Commissioner for Human Rights, said.