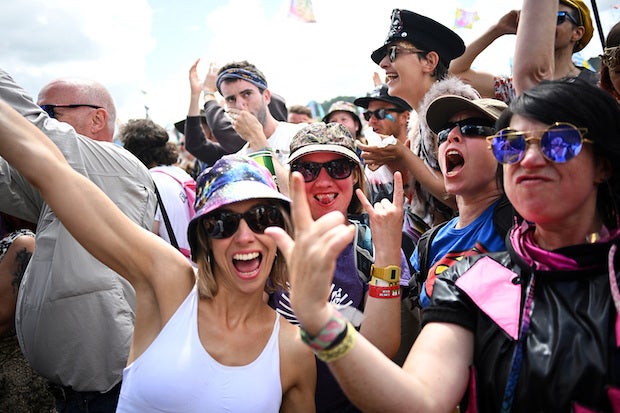 Revelers dance as Skunk Anansie perform on the Pyramid stage at Worthy Farm in Somerset during the Glastonbury Festival in Britain, June 25, 2022. (REUTERS/Dylan Martinez)

GLASTONBURY, England — Joyful fans grabbed spots at the front of Glastonbury’s Pyramid stage early on Saturday for Paul McCartney to headline the festival’s 50th anniversary, a performance delayed for two years by the global pandemic.

McCartney, one of the greatest songwriters of the 20th century in his Beatles partnership with the late John Lennon, will play the coveted slot one week after turning 80.

Jack Sunderland, 22, was in position from 7:00 am. He said McCartney had inspired him to become a musician.

“He’s a hero,” said Sunderland, who works as a funeral director. “Everyone would want to see a living legend like him.”

Henry Thurgood had dressed in a copy of the aquamarine suit McCartney sported on the sleeve of 1967’s “Sgt. Pepper’s Lonely Hearts Club Band” for the occasion.

McCartney, who first performed at Glastonbury in 2004, had been due to take part in the 50th-anniversary edition of the festival in 2020 before it was canceled because of the COVID-19 pandemic.

Co-organizer Emily Eavis said in March that his performance would be “a huge moment.”

“It means the world getting Paul McCartney to Glastonbury,” she said.

McCartney, who will be the festival’s oldest ever headliner, will take to the stage one day after its youngest.

She alluded to the US Supreme Court overturning the constitutional right to abortion earlier on Friday, saying it was a “really dark day for women.”

Delighted music fans get back to Glastonbury and Paul McCartney

When I get older: Paul McCartney going strong at 80