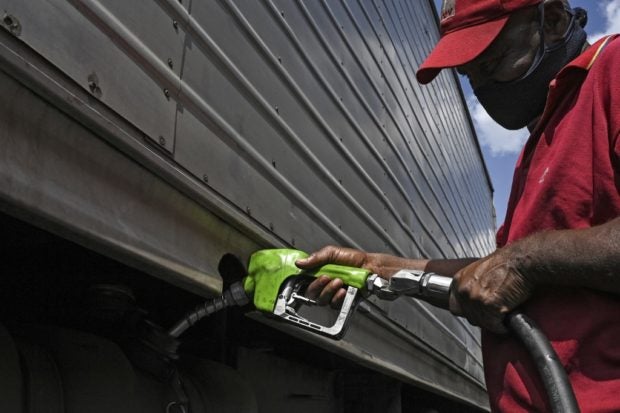 A worker fills the tank of a truck transporting vegetables with diesel at a gas station in this photo taken on April 26, 2021. File photo from AFP

MANILA, Philippines —  A group urged the government on Thursday to eliminate “unnecessary charges” for truckers in order to help reduce the burden of growing prices since the industry may end up temporarily suspending operations as a result of rising fuel prices.

This was stated by the Confederation of Truckers Associations of the Philippines (CTAP) in an interview with INQUIRER.net, as it explained that the consistent increase in fuel prices continues to elevate costs of truck operators.

“Nangyayari ngayon, is when the freight is not really commensurate with the rate that you are enjoying… nagpapahinga muna. They are just temporarily suspending their operations,” said CTAP president Maria Zapata.

(What is happening now is when the freight is not really commensurate with the rate that you are enjoying… They rest first. They are just temporarily suspending their operations.)

Truckers then wait until a more profitable trucking rate returns before they resume operations, added Zapata.

Zapata said that this kind of problem had already forced some trucking companies to stop their operations after not being able to sustain their operations by way of paying their amortization.

However, the CTAP president said that  the government can still help reduce truckers’ burden by removing “unnecessary expenses” from different policies — which include truck accreditation from several government agencies, passing (entrance or exit) fees, over penalties for minor offenses, among others.

(These are the things we ask the government to address… if we can all be efficient, that will help. And you know how much “that” is, that’s more or less 70,000 per unit per month, that’s a lot.)

(So if the government will help us address that, give us a remedy for those concerns, that would be a big help… that’s what we’re looking for, for the incoming government to see the issues and fix it.)

Zapata also said that CTAP had already contacted its principals (clients who are importers, exporters and traders) for temporary fuel adjustment, in an attempt to alleviate the burden caused by the rising price of fuel.

Pump prices of fuel may reach P100 per liter