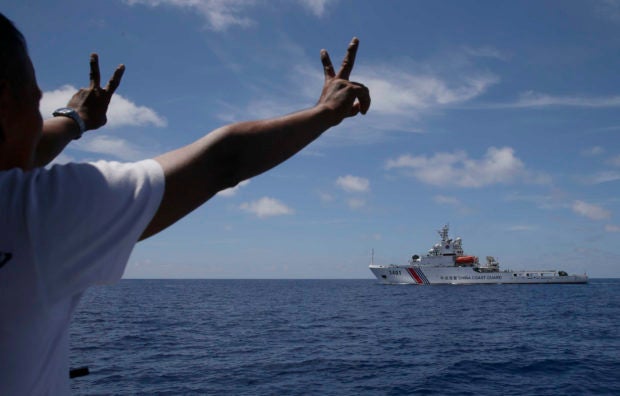 MANILA, Philippines — Lawmakers and the top officials of Kalayaan town in Palawan province on Thursday condemned the attack against two Filipino vessels carrying supplies for Philippine troops at Ayungin (Second Thomas) Shoal by the Chinese Coast Guard and urged the administration to stand against bullying by Beijing.

Roberto del Mundo, mayor of Kalayaan town which has jurisdiction over the shoal, about 260 kilometers west of Palawan’s Quezon municipality, said that “if the Chinese could do this to our military, they would be more emboldened to bully our fishermen who are civilians.”

“All we ask is the freedom to sail in the waters within our country’s exclusive economic zone,” he said.

Kalayaan Vice Mayor Hermoso Ornoia, a retired soldier, said Filipinos should not allow themselves to be bullied in their own backyard and the Chinese action should be viewed as an attack against Philippine sovereignty.

Foreign Secretary Teodoro Locsin Jr. has protested the Nov. 16 attack against two civilian fishing boats which had sailed from Palawan to bring fresh supplies to the Philippine military detachment on the Navy ship BRP Sierra Madre which has been marooned at the shoal since 1999.

The Chinese used a water cannon to blast the boats, the ML Unaizah May 1 and 3, forcing them to turn back.

Locsin expressed the country’s “outrage, condemnation and protest” and demanded the Chinese ships to “back off.”

He said the boats were “public vessels” covered by the 1951 Philippines-United States Mutual Defense Treaty.

He said the President could “demand justice” from the United Nations Convention on the Law of the Sea and other treaty bodies and assert the 2016 international arbitral tribunal ruling nullifying China’s expansive claims to the South China Sea, including the West Philippine Sea.

“As Commander in Chief, the President should spearhead the protection of our troops and our people,” Gordon said.

Pimentel, chair of the Senate foreign relations committee, reminded all parties in the maritime dispute over the whole or parts of the South China Sea “to avoid physical contact at all costs” as this could lead to a “slippery slope” where the consequences could spiral out of control.

Hontiveros said the Chinese actions were an “outright and unacceptable violation of (the Philippines’) sovereign rights and jurisdiction.”

“Let us show our military personnel, the very same people who risk their lives for our country, that we will always defend them,” she said.

Pangilinan, the opposition vice presidential candidate, said the Philippines should never allow China to occupy its islands, disrespect its soldiers, or acquire its prized resources.

Tolentino, an ally of the President, said China’s “bullying tactics have no place under international law” and Filipino fishermen should be protected in “nonfriendly instances” such as the water cannon attack against the civilian boats.

“The Philippines should rely on an international ‘balance of power’ so that we will not end up as mere pushovers,” according to Lacson.

“That is our own territory, yet, we are being driven away from it—that is an ominous sign,” he said.

Sotto said the attack was “a form of veiled threat” from China that could draw in the United States.

“Whether there was injury sustained, for as long as there is already a form of aggression, the provisions of the Mutual Defense Treaty will come into play,” he said. —


WITH A REPORT FROM ROMAR MIRANDA AND INQUIRER RESEARCH