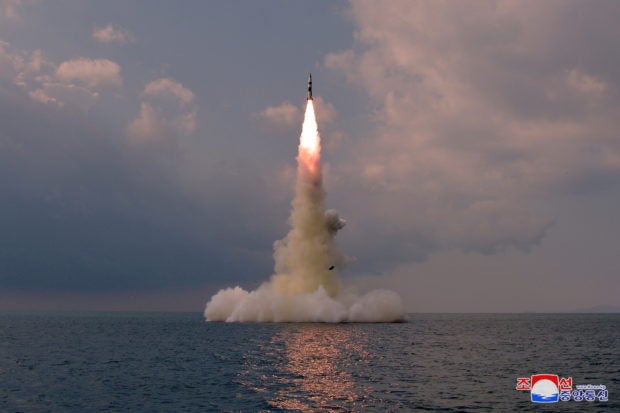 A new submarine-launched ballistic missile is seen during a test in this undated photo released on October 19, 2021 by North Korea’s Korean Central News Agency (KCNA). KCNA via REUTERS

SEOUL — North Korea said it had test-fired a new ballistic missile from a submarine, state media reported on Wednesday, a day after authorities in South Korea and Japan detected an apparent weapons test.

South Korea’s military reported on Tuesday that it believed North Korea had fired a submarine-launched ballistic missile (SLBM) off its east coast, the latest in a string of North Korean missile tests.

The “new-type” SLBM was launched from the same submarine involved in a 2016 test of an older SLBM, North Korea’s state news agency KCNA said.

Analysts noted that photos released by KCNA appeared to show a thinner, smaller missile than North Korea’s earlier SLBM designs, and may be a previously unseen model first showcased at a defence exhibition in Pyongyang last week.

A smaller SLBM could mean more missiles stored on a single submarine, although with a shorter range, potentially putting nuclear-armed North Korea closer to fielding an operational ballistic missile submarine.

However, the development was expected to have only a limited impact on Pyongyang’s arsenal until it made more progress on a larger submarine that has been seen under construction.

“It’s an interesting development but with only one submarine in the water that can launch notionally one or two of these it doesn’t change much.”

“(The SLBM) will greatly contribute to putting the defence technology of the country on a high level and to enhancing the underwater operational capability of our navy,” KCNA added.

Schmerler said it was unclear exactly what KCNA meant by “flank mobility”, but that “glide skip” is a way to change a missile’s trajectory to make it harder to track and intercept.

North Korea has conducted a number of tests in recent years with short-range ballistic missiles that analysts say are designed to evade missile defense systems in South Korea.

The missile was launched from the sea in the vicinity of Sinpo, where North Korea keeps submarines as well as equipment for test firing SLBMs, South Korea’s Joint Chiefs of Staff said on Tuesday.


Biden, Democrats aim for deal on spending package this week