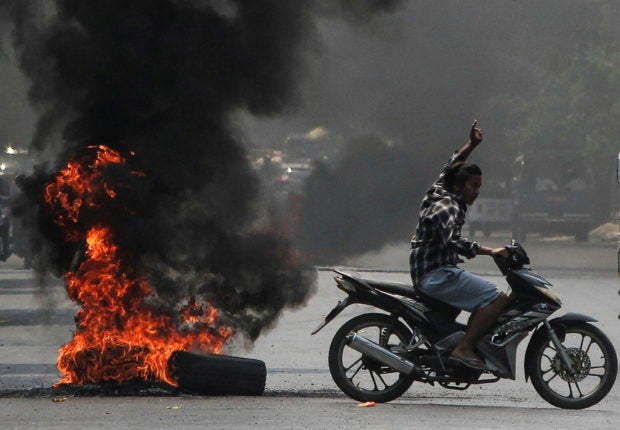 A man flashes the three-finger salute as he passes burning tires during a protest against the military coup, in Mandalay, Myanmar April 1, 2021. REUTERS/Stringer

Opponents of military rule in Myanmar marched and laid bouquets of flowers on Friday while trying to find alternative ways to organise their campaign of dissent after the authorities cut off most users from the internet.

Protests have taken place almost daily since the military overthrew the elected government of Aung San Suu Kyi on Feb. 1. Hundreds of civilians have been killed in a crackdown by security forces that has drawn international condemnation.

In the town of Tamu on the Indian border, a policemen who supported the democracy movement was killed in a clash with security forces, the Monywa Gazette reported.

The authorities, who had already shut down mobile data in a bid to stifle the opposition to the ruling junta, ordered internet providers from Friday to cut wireless broadband, depriving most customers of access.

In response, pro-democracy groups shared radio frequencies, offline apps that work without a data connection, and tips for using SMS messages as an alternative to data services to communicate.

“In the following days, there are street protests. Do as many guerrilla strikes as you can. Please join,” Khin Sadar, a protest leader, said on Facebook in anticipation of the internet blackout, referring to quick protests in unexpected places that break up when the security forces appear.

“Let’s listen to the radio again. Let’s make phone calls to each other too.”

The military did not announce or explain its order to providers to cut wireless broadband. Internet was available only on fixed lines, rare in Myanmar where most homes and businesses connect through wireless networks.

A spokesman for the junta did not answer telephone calls seeking comment.

Despite the internet shutdown, users were still able to upload pictures of marches, “flower strikes” and a funeral of a slain protester.

An image shared widely on social media showed a bird’s eye view of hundreds of flickering candles on a dark road, spelling out the words “we will never surrender”.

Across the country, demonstrators left bouquets, many with messages of defiance, at places associated with activists killed by the security forces.

People held up roses while making three-finger salutes, a symbol of resistance. One arrangement of dandelions and red roses on a lakeside walkway read: “Myanmar is bleeding”.

More than 540 people have been killed in the uprising, many of them when troops fired on crowds, according to the Association for Political Prisoners (AAPP) advocacy group, which is tracking casualties and detentions.

In the commercial hub Yangon, a Myanmar employee of South Korea’s Shinhan Bank died on Friday after being shot in the head while travelling in a minibus two days earlier, the bank said. It was discussing the situation with the government.

The military has said those killed instigated the violence. It says it staged the coup because an election in November – won by Suu Kyi’s National League for Democracy – was rigged and the election commission failed to heed its complaints. The commission and many international bodies have dismissed that assertion.

Suu Kyi, a longtime democracy campaigner who won the Nobel Peace Prize in 1991, is being held in detention.

She and four allies have been charged with violating a colonial-era official secrets act, her chief lawyer said on Thursday, the most serious charge filed against her. Violations are punishable by up to 14 years in prison.

The security forces have also arrested numerous suspected opponents of the coup. The Myanmar Now news portal said five women who spoke to a visiting CNN news crew on the streets of Yangon this week had been taken away by security men.

Western countries have condemned the coup and some have imposed limited sanctions. But neither China nor India, which compete for influence, have denounced Suu Kyi’s overthrow.

Myanmar’s neighbours in the Association of Southeast Asian Nations (ASEAN) have traditionally been reluctant to criticise their fellow member under a principle of non-interference. But there is growing dismay with a country that has for decades raised international concerns over its domestic repression.

Several Southeast Asian foreign ministers met separately this week with a senior official in China, which is a major investor in Myanmar and one of the few countries able to influence the generals, to seek its backing for a bid to find a path out of the crisis.

“China…supports the convening of a special meeting of ASEAN leaders to mediate as soon as possible,” the Chinese government’s top diplomat, Wang Yi, said after talks with Malaysian foreign minister Hishammuddin Hussein.

Adding to the chaos in the former British colony, hostilities between the armed forces and ethnic minority insurgents have broken out in at least two regions.