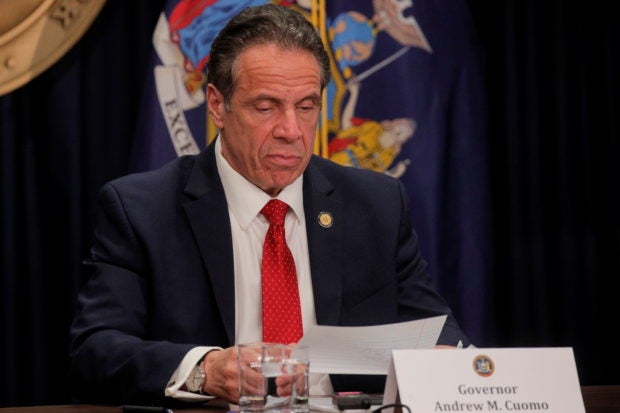 Andrew Cuomo, a Democrat, faces bipartisan calls to resign over accusations of sexual harassment or misconduct from at least eight women and disclosures that his administration under-reported nursing home deaths from the pandemic.

The 63-year-old third-term governor has denied the allegations and repeatedly said he would not resign.

The Post, which cited three unnamed people with knowledge of the situation, reported that a top state doctor made house calls to some of the governor’s family members or close associates, including his brother, to administer the tests. Chris Cuomo tested positive for COVID-19 early in the pandemic.

Reuters could not immediately confirm the reports.

“We should avoid insincere efforts to rewrite the past. In the early days of this pandemic, when there was a heavy emphasis on contact tracing, we were absolutely going above and beyond to get people testing,” Cuomo spokesman Richard Azzopardi said in a statement emailed to Reuters in response to the Post article.

Those efforts included “in some instances going to people’s homes – and door to door in places like New Rochelle – to take samples from those believed to have been exposed to COVID in order to identify cases and prevent additional ones,” the statement added.

Among those assisted, “were members of the general public, including legislators, reporters, state workers and their families who feared they had contracted the virus and had the capability to further spread it,” Azzopardi said.

CNN said in a statement emailed to Reuters: “We generally do not get involved in the medical decisions of our employees.”

“However, it is not surprising that in the earliest days of a once-in-a-century global pandemic, when Chris (Cuomo) was showing symptoms and was concerned about possible spread, he turned to anyone he could for advice and assistance, as any human being would,” the network said.

Chris Cuomo had conducted a series interviews – which some critics called gentle or even comical – on CNN with his older brother during the pandemic.

After the nursing home and sexual misconduct scandals broke, the network said its conflict-of-interest policy meant that Chris Cuomo could not report on the governor.

Chris Cuomo tweeted on Monday that he was on vacation. On Tuesday, his television show’s official Twitter handle said he would be back next week.