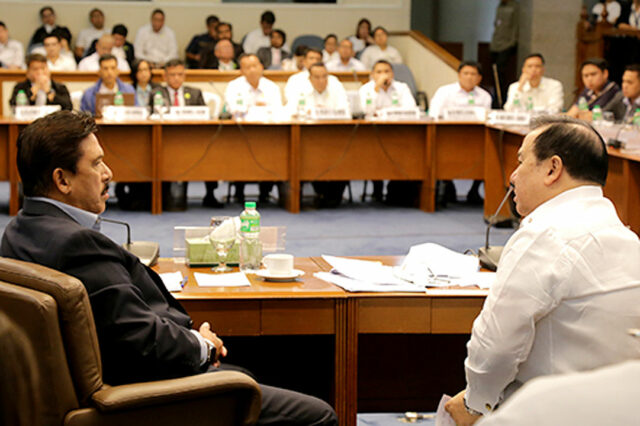 The report also said that at some point after his term of office, charges must be considered against Pres. Duterte because he “betrayed the public trust” when he appointed Yang as his economic adviser and allowed him to help Pharmally, a newly created undercapitalized firm, bag a P10-billion contract with the government. The report further said Duterte betrayed public trust when he sought to discredit not just the Senate but also the Commission on Audit whose state auditors first reported on the anomalies in the Pharmally deals.

The report required the signatures of at least 11 of the 20 members of the endorsing committee to be accepted as an official committee report before it could be submitted for plenary deliberation. But as of June 3, only eight senators other than Gordon had signed the report. They were Senate President Pro-Tempore Ralph Recto, Senate Minority Leader Frank Drilon, Senators Leila de Lima, Risa Hontiveros, Ping Lacson, Manny Pacquiao, Kiko Pangilinan, and Koko Pimentel.

Zubiri and Gatchalian said they would have signed the report if it did not include the name of President Duterte. But the report did not accuse the President of plunder, graft, or any criminal charge. What it said was charges must be considered against him because he “betrayed the public trust.”

De Lima expressed disappointment at the failure of the Blue Ribbon Committee to get the required 11 signatures on the report. She said, “To let these people get away with plunder and corruption smacks of gross dereliction of duty on the part of the Senate. The report would now have to be archived, as if no anomaly happened.” She considers it tantamount to letting culpable parties go scot-free.

Considering that all the 18 hearings of the committee were televised, exposing to the public the apparent anomalous transactions of Pharmally and the obvious attempts of the President to disrupt the investigation and to shield certain officials from being interrogated, a senator not signing the report can be taken to mean he or she would dismiss the Blue Ribbon Committee’s report of massive graft and corruption in order not to alienate the President.

Hontiveros, who was re-elected to the Senate, said she was open to sponsoring a resolution calling for an inquiry into the Pharmally controversy. She is hopeful of getting the support of President Duterte’s allies in the Senate and those incoming senators who ran under the Marcos-Duterte ticket. I think it is wishful thinking on her part. Allies of President Duterte rarely attended the hearings on the Pharmally case.

Of those who signed the report, only Hontiveros and Pimentel will still be in the Senate. Of the seven other signatories, two ran for re-election to the Senate and four for higher office. All lost. One ran for a seat in the Lower House and another decided to retire. Four of their replacements — Robin Padilla, Loren Legarda, Mark Villar, and Jinggoy Estrada ran under the Marcos-Duterte banner.

Senate President Tito Sotto in his valedictory address had the gall to appeal to the incoming Senate to “Maintain the integrity and independence of the Senate” when he himself kowtowed to President Duterte’s directives and policies.

His subservience to the President was markedly manifested in 2019. When Chinese fishermen were seen catching fish in Philippine waters, President Duterte remarked that Chinese fishermen can fish in the West Philippine Sea. Sotto echoed the President’s deferential statement. In true Iskul Bukul fashion, Sotto said “It’s very difficult to say that there is exclusivity if it is underwater. The fish could be coming from China.”

Some people point out that charges against the Pharmally executives need not be filed by the Senate. The Secretary of Justice has the discretion to investigate through the National Bureau of Investigation (NBI), a government agency directly under him, even without a complaint. In fact, the Secretary has used that power for much lower thresholds before. The last time NBI investigated motu proprio (on its own) was to hunt down peddlers of the fake “no vaccine, no aid” rumors. But the attitude of Secretary Menardo Guevara with regard to Pharmally had been passive. He is perceived as compliant to the directives of the President.

Prior to his government stint, Guevarra was in private litigation practice. He was also a member of the faculty of the Ateneo Law School, teaching a broad range of subjects. Most of the past secretaries of Justice had a similar background — long years of private law practice and teaching Law in the most prestigious schools of Law.

The incoming Secretary of Justice is of a different mold. Jesus Crispin Remulla, better known as Boying Remulla, comes from a political dynasty. He is one of the sons of Johnny Remulla, who was governor of the Province of Cavite for 14 years. Boying himself has been governor of Cavite and representative of the 3rd and 7th districts of the province.

He was one of the most vocal congressmen opposed to the renewal of the franchise of ABS-CBN. He and 69 other congressmen accused the broadcast network of tax avoidance and of selling shares through depository receipts to foreigners, a violation of the Constitutional provision that prohibits aliens from owning Philippine mass media. But political pundits say they were just following the promptings of President Duterte who had an axe to grind against the broadcast network. It was as if they said, “Thy will be done, Mr. President.” In short, Boying Remulla is a traditional politician, a “trapo” in the language of the street.

So, the final resolution of the Pharmally case depends on whether Justice Secretary Jesus Crispin Remulla acts as a traditional politician or as a man of the law.

Oscar P. Lagman, Jr. is a retired corporate executive, business consultant, and management professor. He has been a politicized citizen since his college days in the late 1950s.