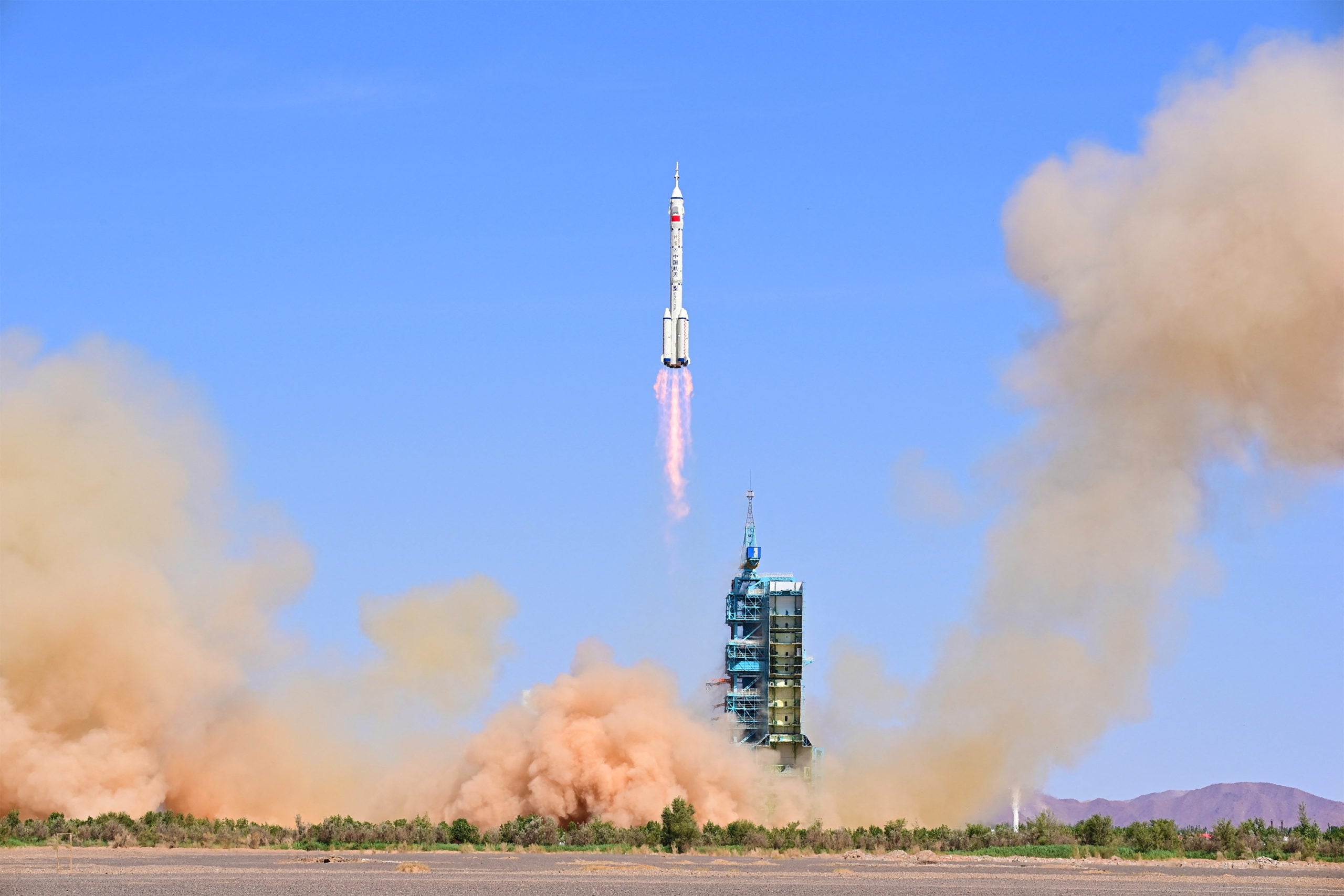 BEIJING  — China sent three astronauts on Sunday on a six-month long mission to oversee a pivotal period of construction of its space station, whose final modules are due to be launched in the coming months.

The space station, when completed by the year-end, will lay a significant milestone in China’s three-decades long manned space program, first approved in 1992 and initially code-named “Project 921.” It will also flag the start of permanent Chinese habitation in space.

The completion of the structure, about a fifth of the International Space Station (ISS) by mass, is a source of pride among ordinary Chinese people, and caps President Xi Jinping’s 10 years as leader of the ruling Communist Party.

A Long March-2F rocket, which was used to launch China’s first crewed spaceflight on the Shenzhou-5 mission in 2003, lifted off from the Jiuquan Satellite Launch Center in the Gobi Desert in northwest China at 10:44 a.m. (0244 GMT) with the spacecraft Shenzhou-14, or “Divine Vessel,” and its three astronauts, a live broadcast by state television showed. 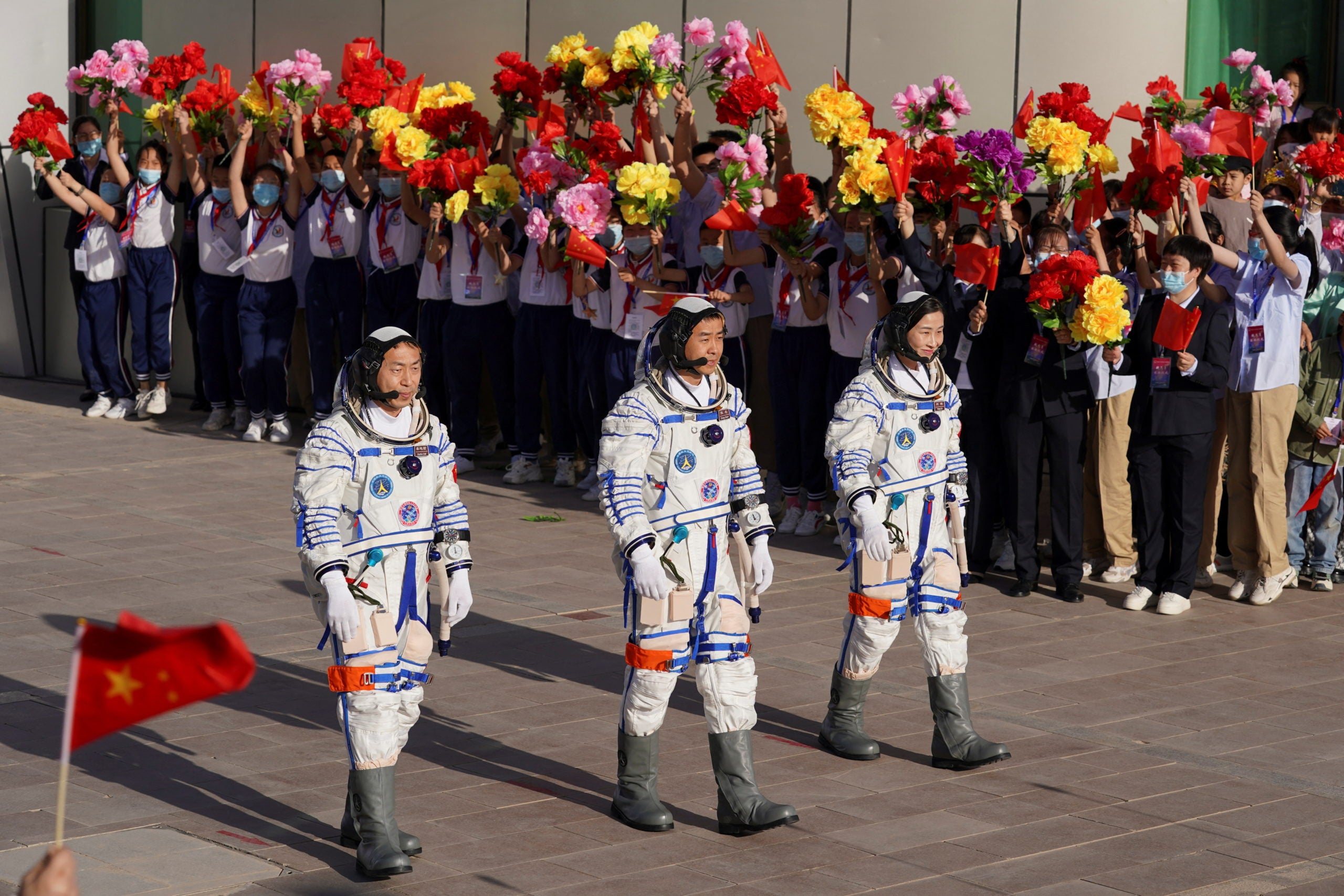 “I watched the launch of Shenzhou-5 when I was a primary student, and now we have Shenzhou-14,” Zanna Zhang, a social media developer, told Reuters.

“Of course I’m super excited, and I’m so proud as a Chinese. We’re one step closer to becoming a space superpower,” the 25-year-old said.

Construction began in April last year with the launch of the first and largest of its three modules – Tianhe – the living quarters of visiting astronauts. The lab modules Wentian and Mengtian are to be launched in July and October, respectively.

Shenzhou-14 mission commander Chen Dong, 43, and team mates Liu Yang, 43, and Cai Xuzhe, 46, all from China’s second cohort of astronauts, will live and work on the space station for about 180 days before returning to Earth in December with the arrival of the Shenzhou-15 crew.

Former air force pilot Chen with Liu, who became China’s first female astronaut in space a decade ago, and space mission debutant Cai, will oversee the rendezvous, docking and integration of Wentian and Mengtian with the core module.

They will also install equipment inside and outside the space station and carry out a range of scientific research.

“The Shenzhou-14 mission is a pivotal battle in the construction stage of China’s space station,” Chen told a news conference in Jiuquan on Saturday. “The task will be tougher, there will be more problems and the challenges will be greater.”

When completed, the T-shaped space station can accommodate as many as 25 lab cabinets, each a micro lab that can be used to conduct experiments. Wentian will be equipped to support life science research while Mengtian will focus on microgravity experiments.

Wentian will also have an airlock cabin for extravehicular trips, as well as short-term living quarters for astronauts during crew rotations.

The space station is designed for a lifespan of at least a decade.

Its ability for long-term accommodation of just three astronauts, compared with seven on the ISS, has not deterred China from extending invitations to foreign astronauts in its ambition to internationalize the space station.

The three-module station could be expanded into a four-module cross-shaped configuration in the future, a deputy designer of the space station told Chinese media last year.

Mirroring the ISS, spacecraft and modules launched by other nations are also welcome to dock with and become a long-term member of the Chinese station. Commercial human spaceflight to the station is also being explored.