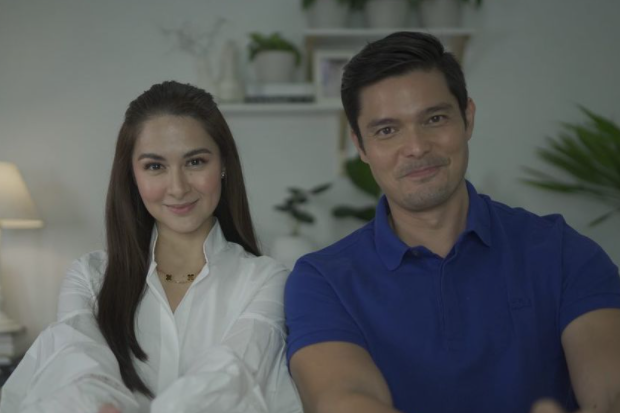 Dingdong Dantes and Marian Rivera are set to finally return onscreen as their next project together is coming “very soon.”

Both actors confirmed their upcoming project during a virtual fan meet through GMA Pinoy TV’s YouTube channel yesterday, Aug. 25. The announcement came after the couple was asked if they would be working together again in the near future.

The couple did not elaborate on the project, though they talked about some shows they would want to do in the future.

“Sitcom, hindi pa [ako nakakagawa] (I haven’t done a sitcom yet),” Dantes said while also teasing his wife about her dream to work with South Korean actor Hyun Bin.

“‘Yung pangarap ko, love triangle,” Rivera quipped. “Involved siya (Dantes) pero dapat kontrabida ko siya.” (My dream is a love triangle. Dingdong is involved, but he should be the antagonist.)

Hyun Bin is known for his roles in the hit Korean drama “Crash Landing on You” and the comedy series “Secret Garden.”

Rivera said earlier this year that while she enjoyed spending time with Dantes and their children, she also hoped to appear on TV again after the COVID-19 pandemic. At the time, she expressed

in working with her husband on a series.

The actress was supposed to play the titular role in the TV series “First Yaya” opposite Gabby Concepcion. She later refused the project at the start of the pandemic, when shows started implementing lock-in tapings. Actress

took over her role in the series, which aired its final episode last July 2.  /

LOOK: Dingdong Dantes, Marian Rivera get ‘sinovaxed’ together in Taguig


Kanye West files to change his name to ‘Ye’