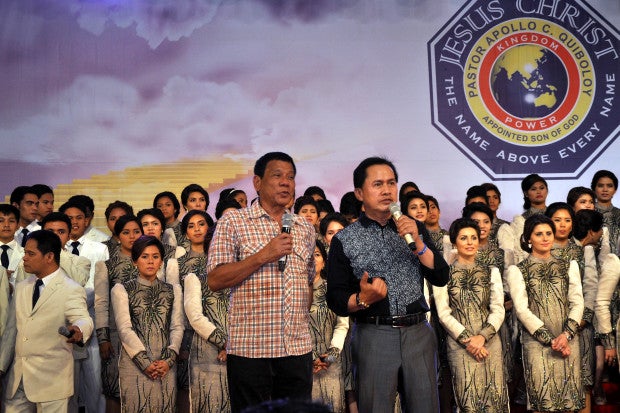 MANILA, Philippines — President Rodrigo Duterte has asked his friend, Kingdom of Jesus Christ founder Pastor Apollo Quiboloy, to just redeem his soul from the devil as he was willing to “mortgage” it to fight criminals, especially those involved in the drug trade.

In an exclusive interview with Quiboloy and his Sonshine Media Network International (SMNI) aired Tuesday, Duterte said “sometimes” he does “evil things” — to stoop to the level of criminals.

“I said if I have to mortgage my soul to the devil to fight them, I will do it. But I hope, Pastor, that you will redeem the mortgage, bayaran mo na lang (just pay for it),” the President told Quiboloy.

(So, it’s like that, mortgage your soul. That’s the reason why I’m being very honest with you, I hope you just redeem me from hell.)

This was Duterte’s response when he was asked how his fight against rampant crime and illegal drugs have been faring five years into his term.

“Sometimes, I also do evil, so evil to evil tayo, and do not ever-ever think that you are the only one who can do evil things kasi ako, marunong rin ako bumaba sa impyerno to really meet you where you want it to be,” Duterte claimed.

(Sometimes, I also do evil, so we go evil to evil, and do not ever-ever think that you are the only one who can do evil things because me, I also can go down to hell to really meet you where you want it to be.)

(I will not elaborate on that, but what you can do, I can also do it. And I will do it, that’s what happened, I will not let you get through. But Pastor, for the life of me, I never, never, allowed the killing of young people.)

According to Quiboloy, people are amazed at what the President has done as he was willing to risk his life for the betterment of the country.

“Alam niyo, ‘yon ang bilib ng tao sa inyo kasi ‘yong trabaho ninyo ginagawa ninyo to the extent that you lay down your own life, for us,” he claimed.

(You know, people are amazed at you for the work you’re doing to the extent that you lay down your own life, for us.)

While Duterte has enjoyed high popularity based on surveys, his approach to solving crime and the drug trade has been scrutinized locally and abroad.

Under his term, Duterte implemented a bloody war against illegal drugs, which critics say has encouraged extrajudicial killings and impunity.

To date, only a few police officers have been convicted for drug war deaths — those who murdered 17-year-old Kian delos Santos, who was a casualty of a drug operation.