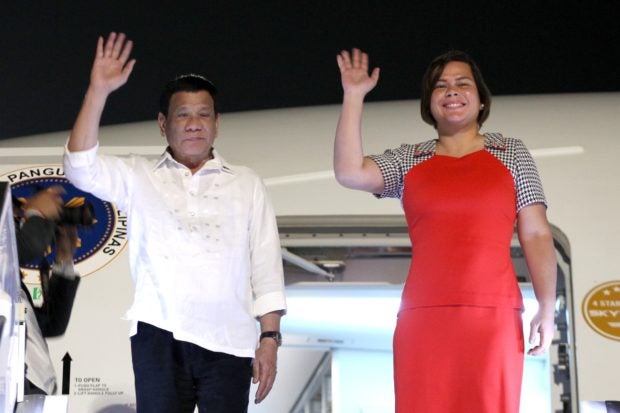 MANILA, Philippines — President Rodrigo Duterte insisted that he does not want his daughter, Davao City Mayor Sara Duterte-Carpio, to run for president.

In an interview with Kingdom of Jesus Christ founder Pastor Apollo Quiboloy aired Tuesday, Duterte recalled talking to his daughter to warn her against committing the mistake of running for the highest post in the country.

(I talked to Inday last night. I said, do not run. Do not ever-ever commit the mistake of running for the presidency.)

“I do not mean to insult the Filipino people. Presidente, wala ka talagang makuha. Wala para sa iyo. Except for one thing. Yung sense of fulfillment mo sa kapwa tao mo na may nagawa ka. Aside from that, it’s empty.”

(I do not mean to insult the Filipino people. But as President, you won’t get anything. Nothing for yourself. Except for one thing—the sense of fulfillment to your countrymen that you have done something. Aside from that, it’s empty.)

“Unless magtakbo ka ng Presidente tapos mangurakot ka, you will become a billionaire or millionaire, whichever you want,” Duterte continued as he recounted his conversation with his daughter. “Pero is that the life that you want? Sobra-sobra na pera, anuhin mo man ‘yan?”

Duterte also said his daughter would also face a lot of attacks and criticisms which he does not want for the Davao City mayor.

(You do not deserve it. You are my daughter, I will feel sorry for you. And I know you won’t do anything bad. That’s why I told her not to run. I told her last night, do not run.)

Previously, Duterte said the presidency is no job for a woman, insisting that his daughter will not run for the highest office in the 2022 elections.