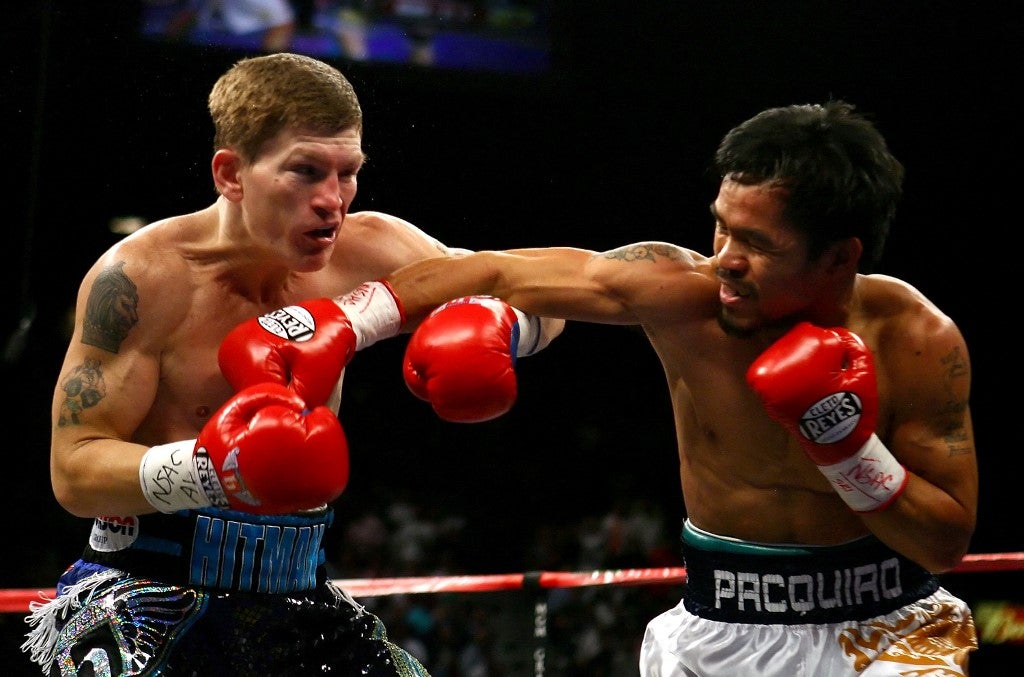 FILE — Manny Pacquiao of the Philippines throws a right to the face of Ricky Hatton of England in the first round of their junior welterweight title fight at the MGM Grand Garden Arena May 2, 2009 in Las Vegas, Nevada. Al Bello/Getty Images/AFP

In his column with Metro, Hatton wrote that while it’s possible that Pacquiao could get hurt against Spence, it could also be an occasion that could see another chapter in the Pacman’s legacy.

There may be a glaring age difference between the 42-year-old Pacquiao and the 31-year-old Spence, Hatton believes years don’t necessarily equate to diminishing power.

“Compared to Keith Thurman who Pacquiao beat in 2019, Spence is a little bit sharper, a little bit crisper in what he does. You would think that the reflexes might be starting to go a bit on Manny Pacquiao. But every now and again you get the odd freak. Bernard Hopkins went onto become a world champion at 48!” wrote Hatton, who lost his IBO welterweight title to Pacquiao in 2009.

“The one thing is, he is absolutely going to go down as one of the greatest of all time but we don’t want to see him get hurt. But you have got to put faith in him and the team behind him and assume they are clever enough to know what they are doing.”

Pacquiao (62-7-2), who could be reinstated as the WBA’s (Super) champion, will make his ffing return against WBC and IBF titleholder Spence after nearly two years of absence after he beat Thurman in July of 2019.

Spence (27-0), meanwhile, is coming off a unanimous decision win over Danny Garcia in December of 2020.

“We can’t point out Manny Pacquiao’s age and say he can’t do it. We always worry about these things happening because no one likes to see fighters who we have so much admiration for go in there and get hurt,” said Hatton.

“But if you are still performing at the highest level why not? But he will certainly have to raise his game again against Spence, he is a hell of a fighter.”

Hatton added that Pacquiao’s desire to fight Spence, considered as one of the top welterweights in the world alongside WBO champion Terence Crawford, is a testament to the eight-division World champion’s longevity and consistency atop the sport.

Spence is listed at no.6 in Ring Magazine’s pound-for-pound list while Crawford is at no.3.

Pacquiao isn’t in the top 10 of the publication’s pound-for-pound rankings but he is no.3 in its welterweight rankings.

“He’s a very clever person. Traditionally boxers don’t know when to call it a day. They don’t know when to pick the right time to hang their gloves up but you would like to think he is clever enough to do that and the fact that he is accepting this fight only means he must feel he is still capable of mixing it up at that level,” said Hatton.