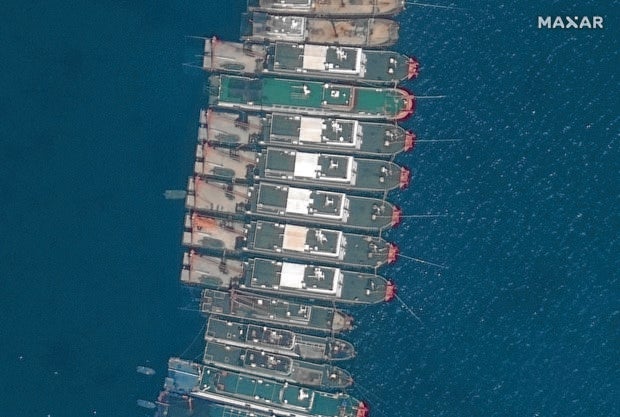 AND THEN THERE ARE 28 Philippine military officials say only 28 of the more than 200 Chinese fishing vessels—here seen up close in a satellite image—remained anchored at Julian Felipe Reef, which China calls Whitsun Reef, as of Sunday. —REUTERS

MANILA, Philippines — Defense Secretary Delfin Lorenzana and his US counterpart Lloyd Austin III discussed on Sunday the fleet of Chinese ships still anchored at Julian Felipe Reef in the Philippines’ exclusive economic zone since early March when they were first spotted there.

The two officials made their phone call ahead of Monday’s resumption of the Balikatan joint exercises between the American and Philippine military, which was canceled last year because of the COVID-19 pandemic.

But even before the pandemic, President Duterte, who had been critical of Washington’s stand against his drug war policy, had been ambivalent about the conduct of joint military exercises under the Visiting Forces Agreement (VFA), which provides the legal framework for US troops to operate on a rotational basis in the Philippines.

Mr. Duterte is also seen as being careful not to antagonize Beijing, which he regards as a friend and ally despite China’s occupation of Philippine waters.

In a statement, Pentagon press secretary John Kirby said “Secretaries Austin and Lorenzana discussed the situation in the South China Sea and the recent massing of People’s Republic of China maritime militia vessels at Whitsun Reef.”

Over 200 ships were seen early in March, but according to Armed Forces of the Philippines chief of staff Lt. Gen. Cirilito Sobejana, the number was down to 28 as of Sunday.

“Secretary Austin reiterated the US commitment to maintaining a free and open Indo-Pacific, rooted in international law, including the United Nations Convention on the Law of the Sea,” Kirby said.

He added that “the secretary proposed several measures to deepen defense cooperation between the United States and the Philippines, including by enhancing situational awareness of threats in the South China Sea.”

A statement by the Department of National Defense (DND) said “Secretary Austin reiterated the importance of the VFA and hopes that it would be continued. Secretary Lorenzana committed to discuss the matter with the President as the final approval lies with him.”

The DND statement further disclosed that Lorenzana also “sought the assistance of Secretary Austin to expedite the delivery of the Moderna vaccines the country has ordered. To which, Secretary Austin replied that he would look into the issue and bring it to the attention of the office concerned.”

There was nothing in the statement about Julian Felipe Reef.

Sobejana said the exercises, which would be held for two weeks, would be on a smaller scale, unlike the previous exercises, as only 700 US servicemen and 1,000 AFP personnel will take part.

Critics of China’s incursion into the West Philippine Sea have called for tougher action against Beijing.

Muntinlupa Rep. Ruffy Biazon said “I think the next step would be to regularize the maritime patrols, in the air and, if possible, on the water. We have already done it anyway and it did not result in war.”

Former Foreign Secretary Albert del Rosario said the pursuit by armed Chinese ships of a Filipino vessel carrying a television crew was tantamount to territorial incursion that calls for a “demarche.”

Del Rosario explained that the United Nations may be informed about the incident through the office of the UN secretary general. “Such UN notification will form part of official [Philippine] communications, including those required under Article 51 of the UN Charter relating to individual and collective self-defense,” he said.

—WITH REPORTS FROM TINA SANTOS AND REUTERS