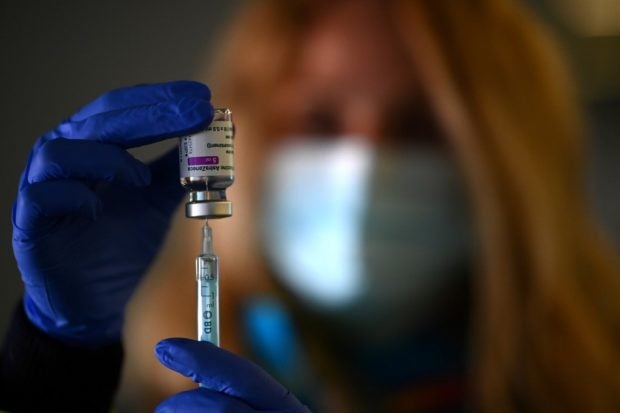 A health worker prepares a dose of the AstraZeneca/Oxford vaccine at a coronavirus vaccination centre at the Wanda Metropolitano stadium in Madrid on March 24, 2021. (Photo by GABRIEL BOUYS / AFP)

THE HAGUE — The EU’s drug regulator said Friday it is reviewing possible blood clot cases in people given the Johnson & Johnson coronavirus shot and probing a new condition linked to the AstraZeneca vaccine.

Four cases, one fatal, of rare clots with low blood platelets were reported among those vaccinated with the Johnson & Johnson shot, the European Medicines Agency (EMA) said in a statement.

Five cases meanwhile were reported of people suffering a rare condition in which tiny blood vessels leak after getting the AstraZeneca jab, causing swelling and a drop in blood pressure.

“It is not yet clear whether there is a causal association” between the two vaccines and the cases, the Amsterdam-based EMA said in a statement.

The fresh questions over vaccine safety come after the watchdog said Wednesday it was listing blood clots as a very rare side effect of the shot by British-Swedish firm AstraZeneca.

But the EMA said its safety committee had now turned its attention to US pharma giant Johnson & Johnson, and “started a review of a safety signal to assess reports of thromboembolic events” in people who had received the jab.

“One case occurred in a clinical trial and three cases occurred during the vaccine rollout in the USA. One of them was fatal,” it said.

The EMA has already approved the Johnson & Johnson vaccine for use, but its rollout across the 27-nation EU is not due to start until later this month.

Johnson & Johnson said there had been a “small number of very rare events” following vaccinations.

“At present, no clear causal relationship has been established between these rare events and the Janssen Covid-19 vaccine,” it said in a statement, referring to the name of J&J’s European subsidiary.

The EMA safety committee has meanwhile also started reviewing “reports of capillary leak syndrome” in people in Europe who have received the AstraZeneca vaccination.

“Five cases of this very rare disorder, characterized by leakage of fluid from blood vessels causing tissue swelling and a drop in blood pressure, were reported,” it said.

Both the Johnson & Johnson and AstraZeneca jabs use similar adenovirus vector technology.

The EMA said that after investigating both of the new reports it would “decide whether regulatory action may be necessary,” which usually involves adding a notification about side effects.

The EMA said earlier this week that it was aware of cases linked to the J&J vaccine, but gave a lower number of three and did not mention the death.

“This is however under close scrutiny… I think it is fair to say there is intensive monitoring of this issue across the vaccines,” Arlett said.

There had been also been 35 reports of blood clot cases linked to the Pfizer-BioNTech vaccine worldwide, and five to the Moderna vaccine, he added.