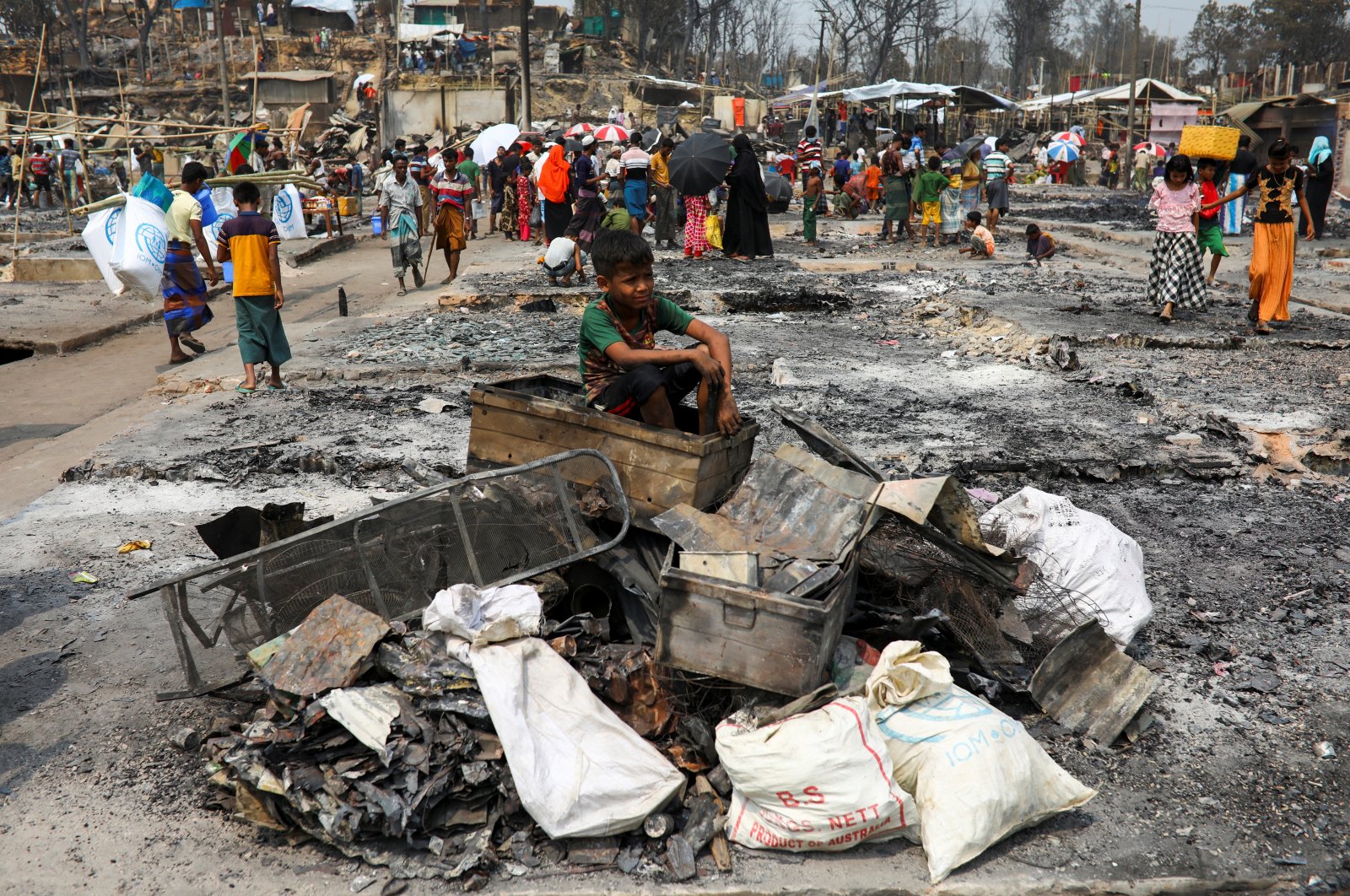 Turkey has swiftly responded to a massive fire in a Rohingya refugee camp that damaged a Turkish field hospital. A team from Ankara is currently working to rebuild the hospital in southeastern Bangladesh.

A senior official from Turkey’s Disaster and Emergency Management Authority (AFAD) arrived in Bangladesh’s southeastern Cox’s Bazar district with a team to rebuild the hospital and shelters for Rohingya refugees affected by the deadly blaze on March 22.

A total of 26 personnel from the Turkish Health Ministry, AFAD and Turkey’s Housing and Development Administration reached Bangladesh on Saturday.

The team started construction work on the field hospital earlier this week on the same site.

Salih Altınay, AFAD’s head of foreign affairs and humanitarian aid, told Anadolu Agency (AA) that the new hospital would have an open area of 4,000 square meters (43,056 square feet) and a closed area of 1,400 square meters. He added that both the open and closed sites would provide health care facilities to Rohingya refugees in the camp.

He said the aid agency relocated its humanitarian operations from Myanmar to Bangladesh’s Cox’s Bazar in 2017, shortly after the human tragedy that forced the Rohingya Muslims to leave their homes.

The vast majority of the people in the camps fled Myanmar in 2017 amid a military-led crackdown on the Rohingya that United Nations investigators said was executed with “genocidal intent,” charges Myanmar denies.

AFAD had built a full-fledged field hospital in early 2018 that provided all kinds of health care services with 10 doctors and 20 health workers.

The hospital had been providing medical services to 1,000 patients every day until it was entirely destroyed by fire 10 days ago.

It served a total of 512,101 patients since its establishment in 2018, according to hospital records.

Samina, a 7-year-old Rohingya girl, who lost her eyesight at the age of 2, was a regular patient at the Turkish hospital for the last six months. Her condition started to improve due to a fortnightly checkup and medication.

But when the hospital burned down, all hope seemed to have faded. Thanks to Turkish support, however, it will be up and running soon.

The Turkish state-run aid agency had also constructed 4,620 bamboo-made shelters for the refugees in the area.

“Our (field) hospital and approximately 1,400 bamboo houses (for Rohingya refugees) became unusable in the fire that occurred on March 22,” Altınay said.

Now Turkey is building a new field hospital which will be operational for the Rohingya very soon, according to him.

“We will (also) start the reconstruction of shelters (affected by the deadly blaze) as soon as possible,” he went on to say.

On the instructions of Turkish President Recep Tayyip Erdoğan, AFAD, along with the ministries of health, environment and urbanization, have started providing aid to the refugees, Altınay said.

According to the U.N. refugee agency, the most devastating fire in the history of Rohingya refugees in Bangladesh killed 15 people, gutted over 10,000 shelters and displaced around 45,000 refugees.

He added that this would also encourage other service providers to help the Rohingya, often termed as the world’s most persecuted people.

A media training workshop for Rohingya Muslims, organized by Turkey’s Presidency for Turks Abroad and Related Communities (YTB) and AA, ended on Wednesday.

The Rohingya Online Media Training Program was held via videoconference from March 29 to 31, and included about 30 participants from the Rohingya diaspora in various countries.

Training programs on multimedia and internet journalism, new media and social media and diaspora journalism were conducted in English by the agency’s experienced staff over the three-day period.

“Anadolu Agency gives voice to the oppressed … and also contributes to the capacity building of young journalists through these workshops,” said Alptekin Cihangir, the director of AA’s News Academy.

“This training program was very important for us. We want to deliver journalism education to Rohingya Muslims. … Thanks to these trainings, their voice will attract a greater audience.”

YTB’s Asia-Pacific coordinator Ebubekir Kadri Biskinler said they have been providing training for the Rohingya community since 2019 to highlight their cause and problems, as well as their arts and culture to the world more effectively.

Biskinler said the Next Generation Academy leadership program is also being organized for young people in the Asia-Pacific region.

“So far, 25 young people from the Rohingya diaspora have participated. Our presidency aims to improve the relations of the Rohingya community with other countries,” he said.

More than 700,000 Rohingya fled to neighboring Bangladesh in 2017 as the Myanmar military launched a crackdown that saw villages being burned down, extrajudicial killings and rapes.

Turkey has always supported the community, repeatedly drawing attention to their plight.