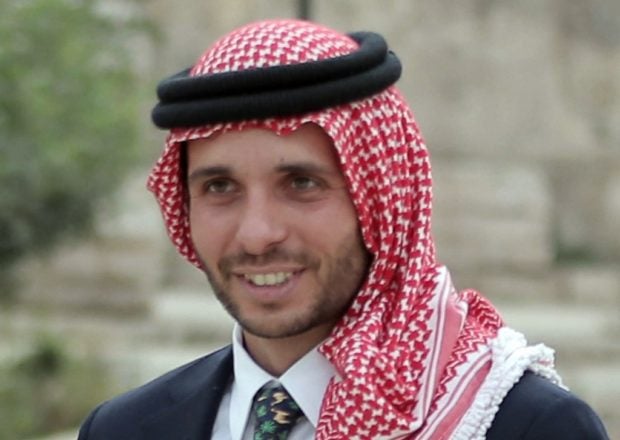 (FILES) In this file photo taken on September 09, 2015 shows Jordan’s Prince Hamzah Bin Al-Hussein attends a press event in Amman. The army cautioned Prince Hamzah bin Hussein, the half-brother of King Abdullah II against damaging the country’s security. Hamzah is the eldest son of late King Hussein and his American wife Queen Noor. He has good relations officially with Abdullah and is a popular figure close to tribal leaders. (Photo by KHALIL MAZRAAWI / AFP)

NICOSIA, Cyprus — Jordan’s former crown prince said Saturday he is under house arrest, but denied being part of any conspiracy against his half-brother King Abdullah II as he sharply criticized government corruption.

In a video sent to the BBC, Prince Hamzah bin Hussein said the army chief of staff had visited him earlier in the day to tell him: “I was not allowed to go out, to communicate with people or meet with them.”

He said a number of his friends had been arrested, his security removed and his internet and phone lines cut.

But the prince insisted he was not part of a conspiracy and was “not responsible for the breakdown in governance, for the corruption and for the incompetence that has been prevalent in our governing structure for the last 15 to 20 years and has been getting worse”.

The BBC said it had been sent the video by Hamzah’s lawyer, as news broke that a top former Jordanian royal aide was among several suspects arrested Saturday.

Th army said it had cautioned Hamzah against damaging the country’s security, but denied he had been arrested.

“I am not part of any conspiracy or nefarious organization,” Hamzah hit back in the video, adding it was a “sad and unfortunate turn for a country that… was at the forefront of the region”.

He maintained that people were no longer allowed to criticize the authorities or express an opinion “without being bullied, harassed or threatened.”

“Unfortunately this country has become stymied in corruption, in nepotism, and in misrule and the result has been the destruction or the loss of hope.”

Hamzah is the eldest son of late King Hussein and his American wife Queen Noor. He has good relations officially with Abdullah, his half-brother, and is a popular figure close to tribal leaders.

Abdullah had appointed Hamzah crown prince in 1999 in line with their father Hussein’s dying wish, but in 2004 stripped him of the title and gave it to his own eldest son Hussein.

The official news agency Petra named Bassem Awadallah, chief of the royal court in 2007-2008, and Sherif Hassan bin Zaid as among an unspecified number of suspects arrested on Saturday.

Sherif is a title given to those close to the royal family in Jordan.

The pair were detained for “security reasons” after a “close” operation, Petra said, quoting a security source.