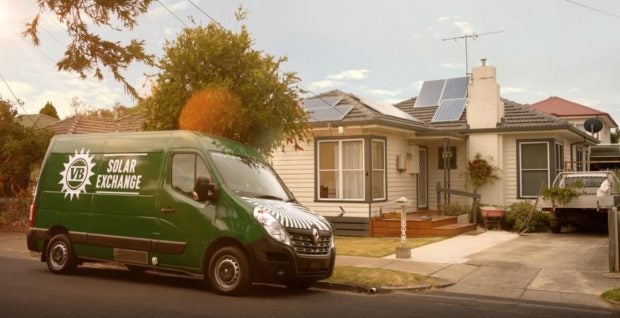 A VB Solar Exchange van is seen in front of a house with solar panels, in this undated handout image obtained March 31, 2021. REUTERS.

MELBOURNE — How about a cool beer in exchange for your excess solar power?

That’s the offer from Asahi Group’s Carlton and United Breweries (CUB) in Australia, serving up Victorian Bitter to households who have rooftop solar power to spare, in what the companies involved believe to be a world first.

Along with putting solar panels on its Melbourne brewery and buying power from a solar farm, CUB is looking to buy excess solar power from households, paying in cans of beer instead of cash, to help meet its target to use 100 percent renewable power by 2025.

“The only thing better than drinking the Big Cold Beer in the Aussie sun is earning beer while you do it,” said Brian Phan, general marketing manager for Victoria Bitter.

Beer drinkers would have to switch to energy retailer Diamond Energy to get in on the deal.

For every $23 of credit Diamond Energy books for feeding solar power back into the grid, CUB will deliver a slab of beer — 24 cans — worth $38 to your home.

The offer is equal or better than the standard feed-in tariff across the eligible states, said Power Ledger, a blockchain-enabled energy trading platform, which will track how much power customers feed to the grid.

“You can see how many bottles of beer you’ve earned every 30 minutes,” Power Ledger founder Jemma Green said.

The standard feed-in tariff ranges between 6 cents per kilowatt-hour and 10.2 cents per kWh, depending on the state.