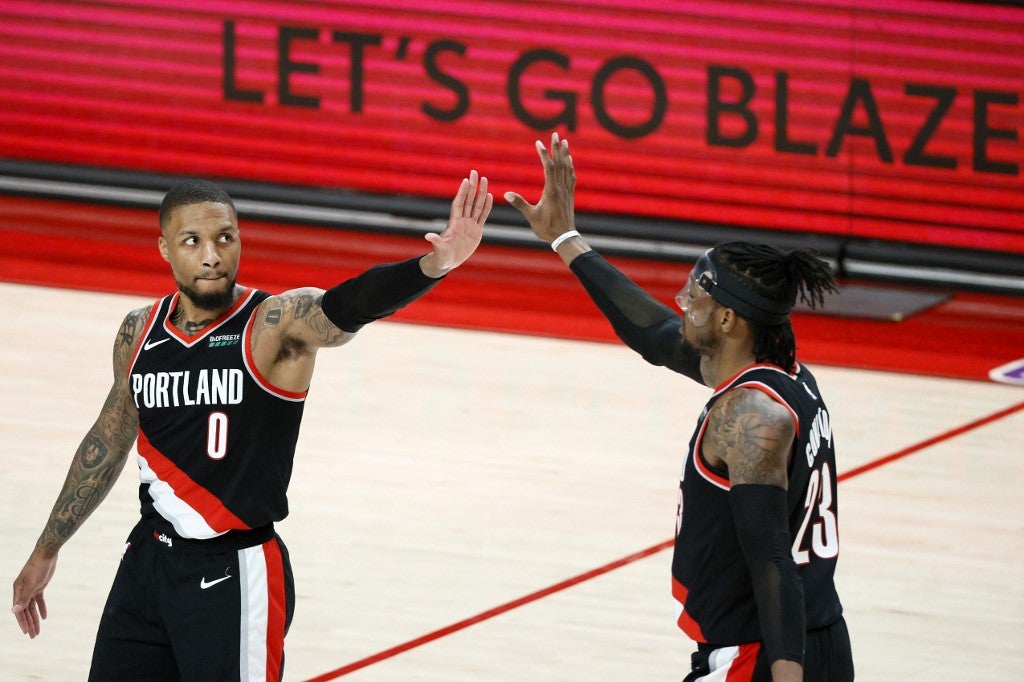 FILE — Damian Lillard #0 and Robert Covington #23 of the Portland Trail Blazers high five after a play against the Brooklyn Nets during the fourth quarter at Moda Center on March 23, 2021 in Portland, Oregon. Steph Chambers/Getty Images/AFP

Damian Lillard made three free throws with one second left, leading the visiting Portland Trail Blazers to a 125-122 win over the Miami Heat on Thursday night.

With the score tied, Miami’s Trevor Ariza made slight contact on Lillard’s right forearm on an air-ball 3-point attempt, leading to the whistle. Miami, out of timeouts, did not get a shot off on its final possession.

The Blazers earned the win despite trailing by 10 points in the fourth quarter.

Portland’s CJ McCollum scored 21 of his game-high 35 points in a sizzling first quarter, but he had just six points in the second half.

Lillard, scoreless in the first quarter, finished with 22 points and nine assists. He entered the game second in the NBA in scoring at 30.1 points per game.

Portland’s Enes Kanter had 18 points and 16 rebounds, including nine on the offensive glass, and Carmelo Anthony added 20 points.

The Heat tied a season worst with their fifth straight loss while completing an 0-4 homestand.

The Heat competed with just nine players. Jimmy Butler, the team’s top player, sat out due to a stomach ailment, and the Heat are 4-11 this season without him.

Miami also was without Goran Dragic (back spasms) for the third straight game, and the team’s new trade arrivals had not yet been activated. Miami dealt four players on Thursday to get Victor Oladipo and Nemanja Bjelica.

The Blazers, with eight quick points by McCollum on 3-for-3 shooting, got off to a 10-2 start and led 31-24 after the first quarter.

There were six lead changes in the second quarter before Portland went into halftime with a 59-58 lead. McCollum went into the break with 29 points on 11-for-13 shooting, including 6-for-8 success from 3-point range.

McCollum cooled off in the third quarter — four points on 2-for-6 shooting — and Miami tied the score 91-91 on Herro’s fortuitous banked-in 3-pointer at the buzzer.

The game was close in the final moments before Lillard decided it at the foul line.