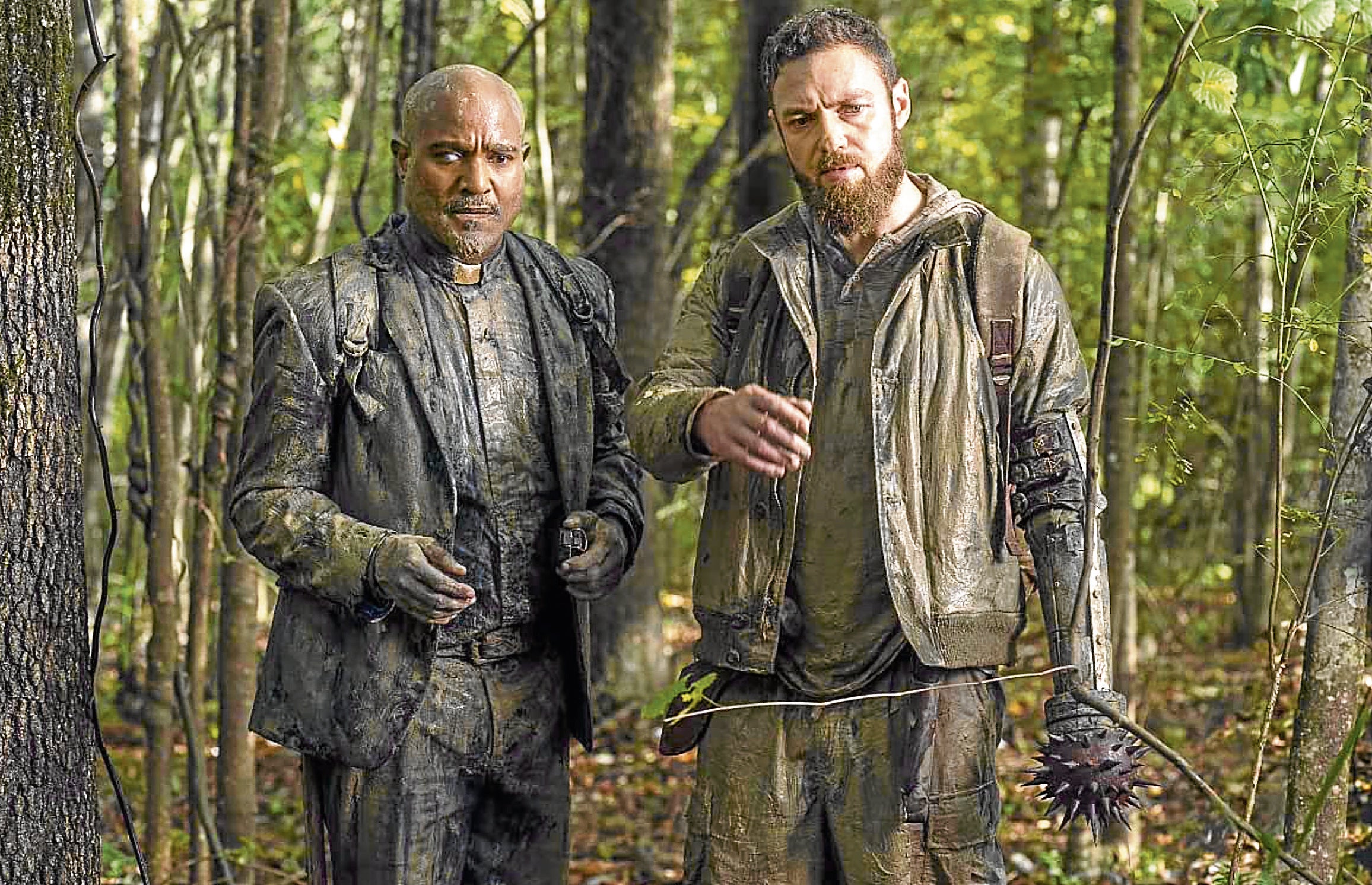 A lot of blood has been spilled since guilt-stricken Father Gabriel (Seth Gilliam) and grieving Aaron (Ross Marquand) were first introduced to viewers of “The Walking Dead” in Season 5 (in the episodes, “Strangers” and “Them,” respectively). Each of them has a character arc that’s as compelling as the ravenous zombies pursuing them in “The Walking Dead’s” 10-season run.

Gabriel was a priest who locked parishioners out of his church to guarantee his own safety. Aaron, on the other hand, is the series’ first openly gay character who must come to terms with the death of his lover Eric (Jordan Woods-Robinson), then later ends up killing the Whisperers’ second-in-command Beta (Ryan Hurst).

Last week, Aaron and Gabriel found themselves at the center of “One More,” one of Season 10’s edgiest bonus episodes, which features Mays, an unhinged character that is even scarier than any of the famished and flesh-nibbling walkers, portrayed to sinister perfection by Robert Patrick.

Knowing that they began portraying characters that exist in a world torn apart by a pandemic long before the coronavirus-fueled pandemic brought the world to its knees, how has “The Walking Dead” helped prepare Seth and Ross for the COVID-19 scourge?

“It helped me personally in that, when I heard that they were going to do another 30 episodes of the show, it was something for me to look forward to,” Seth shared. “That made each day a little better and more bearable, because it allowed me to get back to doing what I love to do. But ours is such a different pandemic compared to this insidious virus that we have floating around the world today.”

But, yes, there certainly was that feeling of hopelessness, admitted Ross: “I think we all felt that more in the beginning of the pandemic, because it just seemed like there were no clear answers and, oftentimes, no clear leadership pointing us in the right direction as to how we were going to beat this thing.

“If there is anything that I’ve taken away from the show, it’s that you can always bounce back from the worst of situations if you come together and work as a community.”

Our Q&A with Ross and Seth:

The show is famous for killing well-loved characters. Whose death were you most affected by?

Ross (R): Watching Glenn (Steven Yeun) and Abraham (Michael Cudlitz) die was the hardest, not just because I liked Steven and Michael as people, but also as characters. It was doubly more difficult to see that brutality when you’re just 5 to 10 feet away from those deaths being played out by Negan (Jeffrey Dean Morgan). It looked very real and generated such a visceral reaction from everybody in that circle. I still see flashes of that scene to this day, and I get really freaked out.

Seth (S): For me, it was the death of Tyreese (Chad L. Coleman), who’s a fierce fighter—a gentle giant with a huge heart. But his heart was larger than it’s willing to fight. His death was very poetic to me.

Weren’t you scared that your characters would be next on the chopping block?

S: The only fear that I’ve had about getting killed off was thinking what my next acting job was going to be. I know that deaths in “The Waking Dead” are all impactful and dramatic, so any death scene that’d come would be fun to play. But then, the finality of it would hit me and I’d be like, “Well, how am I going to eat next month?”

R: Yeah, in the beginning stages of the show, I was, to a certain point, in so much debt and up to my eyeballs with over $100,000 in debt. When you don’t work for many, many years, and you finally get that ideal job, you just want to cling to it more than anything.

In those first two seasons, I was constantly worried about getting killed off. Then, you just have to let go and say, “I trust this industry or this show to give me whatever is needed to keep me working. But it’s definitely “feast or famine” in this industry, so we’re very grateful to be working for any amount of time.

Looking back, especially now that the show is gearing up to an end, what were moments you’re particularly proud of that might have flown under viewers’ radar?

S: I’m particularly proud of not passing out on camera from the hot Georgia heat (laughs). I’m proud of myself for being able to stand there, spit out my lines and make them make sense.

R: One of my favorite episodes that I worked on was in Season 7, when I (as Aaron) was trying to get the Oceansiders to join the fight. I did that while I was covered in mud and blood, and rolling around take after take in the freezing rain. That’s when you’re go, “Oh yeah, I work in ‘The Walking Dead.’” This is a great show that really tests you, mentally and physically.

To which do you think does the series owe its durability?

S: To the universal themes it tackles. I think it speaks to what we’re like at our worst and what we are as a society. I also think it’s made more fascinating by a plethora of colorful characters—from someone as young as Judith (Cailey Fleming) to someone as old as Herschel (Scott Wilson). So, everybody gets a chance to dress up and deal with these issues and I think it’s one of the reasons behind its staying power.

R: Yeah, Josh McDermott, who portrays Eugene Porter, really hit the nail on the head when he said in an interview years ago that the series has a wide variety of characters to see yourself in, whether you relate to the strongest characters—like Rick Grimes (Andrew Lincoln) or Michonne (Danai Gurira)—or its most flawed. But the reality is, we have no idea how we would react to a real apocalyptic scenario—and I think that uncertainty is one of the show’s biggest strengths.