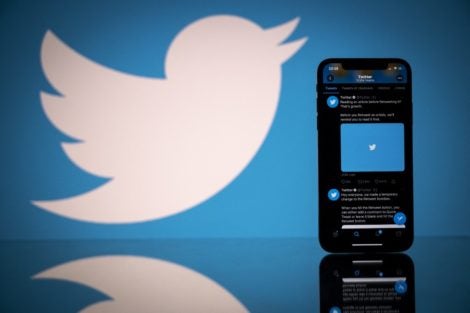 In this file photo taken on October 26, 2020, this photograph shows the logo of US social network Twitter displayed on the screen of a smartphone and a tablet in Toulouse, southern France. (Photo by Lionel BONAVENTURE / AFP FILE)

Washington, United States — Twitter on Friday began a survey of global users about platform rules for world leaders while consulting human rights and academic specialists on its next policy steps.

The announcement comes after Twitter joined other social networks banning then-president Donald Trump for his comments seen as inciting the violent attack on the US Capitol in January.

The ban was criticized by Trump supporters while others had argued Twitter should have taken action earlier despite its policy of allowing leeway for world leaders and newsworthy posts.

“Politicians and government officials are constantly evolving how they use our service, and we want our policies to remain relevant to the ever-changing nature of political discourse on Twitter and protect the health of the public conversation,” the Twitter safety team said in a blog post.

“That’s why we’re reviewing our approach to world leaders and seeking your input.”

Twitter will be asking users their views in a survey in 14 languages, from Friday until April 12.

“Generally, we want to hear from the public on whether or not they believe world leaders should be subject to the same rules as others on Twitter. And, should a world leader violate a rule, what type of enforcement action is appropriate,” the statement said.

“We’re also in the process of consulting with a range of human rights experts, civil society organizations, and academics worldwide whose feedback will be reflected in forthcoming revisions to the policy framework.”