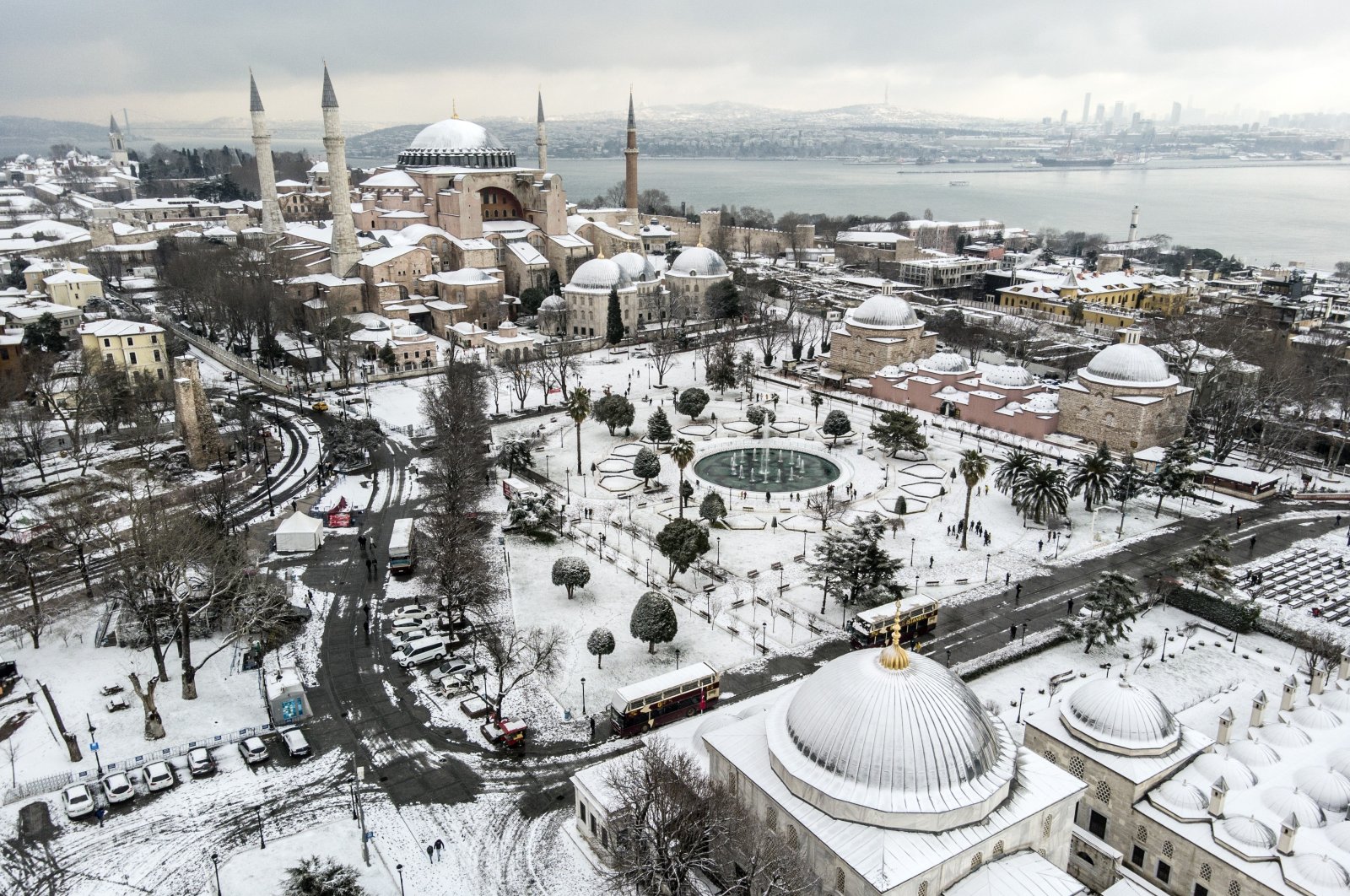 Istanbul was gripped by sporadic snowfall that began on Saturday evening, giving a much-needed boost to the country’s most populated city suffering from a lack of precipitation this winter.

The rare snow was a joy for millions though they had to settle for watching snowflakes pattering on their windows as a weekend curfew due to COVID-19 pandemic confined people to their homes. On Monday, the impact of the snowfall was evident in the morning rush hour. Traffic came to a halt in the city before returning to normal hours later.

As the weekend curfew ended in the early hours of Monday, Istanbulites took to the streets to take snapshots of picturesque views of the city in popular locations like Istiklal Avenue. For children, it was the rare chance to build a snowman from the first snowfall in a few years to give enough material to build a snowman.

Snowfall was expected to end by Monday evening, and the weather forecast shows cloudy weather with temperatures fluctuating around 10 degrees Celsius and below for Tuesday and the following days.

Istanbul Metropolitan Municipality (IBB) crews were on alert against the snowfall’s impact on the lives of residents. Some 7,000 workers and more than 1,300 snowplows and other motorized vehicles were deployed across the city. They cleared snow-covered roads and poured salt on the streets against icing. Snowplows were deployed to far-flung villages on the city’s European and Asian sides. Bus services, already working with low capacity due to the curfew, continued uninterrupted. Officials warned residents to avoid taking their cars if they do not have winter tires as the temperatures led to freezing on some roads in the city.

The municipality also offered shelter to 335 homeless people at homeless hotels across the city, providing them food, clothes and beds, while food for stray animals is regularly being distributed at 325 locations.

The precipitation, although lasting just a few days, was good news for dams supplying water to more than 15 million people in the city. Just a few weeks after a drought alert, dams have seen a rise in their water levels. With this new boost, thanks to the snowfall, which was preceded with rainfall, dams’ water levels reached as high as 30% from below 20% for some dams last week. Istrancalar Dam, the main water source for the city, saw water levels reaching 84%, from 32% on Jan. 10. Alibeyköy Dam, where receding waters turned its reservoir into pasture for animals, also saw its water levels rising to 42%. Overall, water levels increased an average 10% for dams since Jan. 8.

The country’s eastern regions, usually susceptible to heavy snowfall in winter due to their climate, meanwhile, struggle with the precipitation affecting daily life. Some 1,344 places, from villages to small towns, had their roads closed due to the bad weather. Crews from local municipalities, governorates and a state-run road authority have been working around the clock to clear the snow in eastern provinces. The eastern province of Ağrı, where snow depth reached 28 centimeters, was particularly hard-hit by the bad weather. Streets were largely closed to vehicular traffic in the province’s center and nearby districts while access to 273 villages was blocked due to thick snow.

In Erzurum, one of the coldest provinces in eastern Turkey, heavy snowfall, which began on Sunday night and continued into Monday, cut off access to 398 locations, from villages to small towns.

In the western parts of the Black Sea region in the north, snowfall blocked the roads to 634 villages in five provinces, from Düzce to Bolu, as crews boarding snowplows and bulldozers exerted efforts to clear the snowy roads.