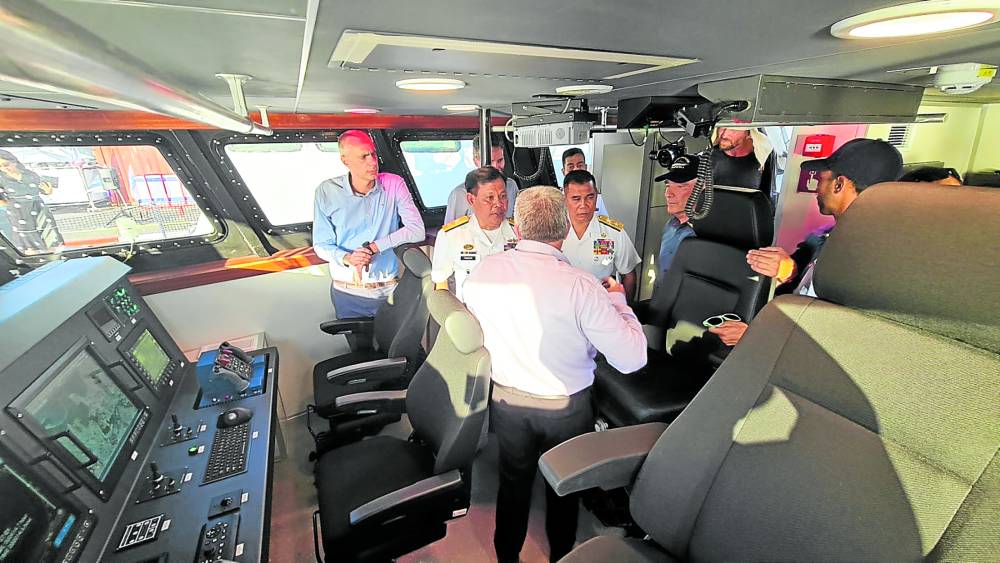 COMMODORES AT THE BRIDGE Commodores Roy Vincent Trinidad and Alfonso Torres Jr. inspect the bridge of one of the Shaldag-class vessels launched in Israel last week. —PHILIPPINE NAVY PHOTO

Delivery of the boats is expected by September. Each has a displacement of about 95 tons, a maximum speed of 40 knots and a range of 1,000 nautical miles at 12 knots.

At 32.65 meters, the Mk. V vessels are the largest of the Shaldag class, which Israeli Shipyards described as [a] “combat-proven [and] recognized leader in the protection of littoral and [exclusive economic zone] waters.”

Navy Commodore Alfonso Torres Jr., chair of the predelivery inspection team, and Commodore Roy Vincent Trinidad, chair of the project management team of the FAIC acquisition project, led the Philippine delegates at the launching of the new ships at the port of Israel Shipyards Ltd. in Haifa on June 26.

Lorenzana to China: You can’t stop us from repairing BRP Sierra Madre

Once commissioned, the first ship would be named BRP Lolinato To-ong, to honor the Marine lieutenant posthumously awarded the Medal of Valor after he was killed in action in 2000 during the campaign against the Moro Islamic Liberation Front.

“[Israel] paved the way for the FAIC acquisition project, [which] includes a complete transfer of technology, a first of its kind in our defense cooperation,” Torres said in his speech during the ceremony.

According to him, the project would allow the Navy to “make a ‘leap-frog’ approach in strengthening our littoral defense capability in the areas of warfare, sustainment and technical knowledge.”

The contract and notice to proceed for the project was issued by outgoing Defense Secretary Delfin Lorenzana in April 2021, with an approved budget contract price of P10 billion.

The contract completion date, when the ships are scheduled to be delivered, was set for December 2028.

As for weapons, the OPV’s 57-mm main gun will be replaced with a 76-mm variant. There is also a single secondary remote-controlled weapon station for a 30-mm naval gun, along with two multibarrel decoy launchers on both port and starboard sides, and two missile launchers behind the smoke funnels.

According to the Department of Defense, the vessels will further enhance the maritime patrol capabilities of the Philippine Navy.