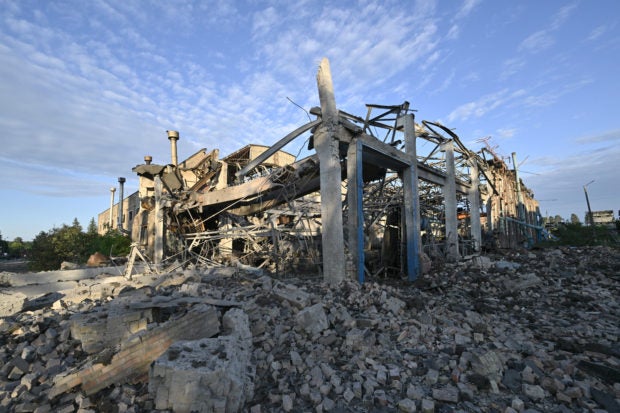 A picture taken on June 5, 2022, shows a destroyed depot of the Darnytsia freight cars repair plant, which was targeted early morning by Russian missile strikes in Kyiv. AFP

KYIV, Ukraine—Here are the latest developments in the war in Ukraine:

“Our defenders managed to counter-attack and liberate half of the city, but the situation has worsened for us.”

Earlier, Gaiday said Ukrainian troops had made gains there, clearing half of the city.

Britain says it will follow the United States and send long-range missile systems to Ukraine, despite warnings from Russia.

The UK defence ministry says London had coordinated closely with Washington over its gift of the multiple-launch rocket systems.

The M270 launchers, which can strike targets up to 80 kilometers (50 miles) away with precision-guided rockets, will “offer a significant boost in capability for the Ukrainian forces”, the ministry adds.

Russian Foreign Minister Sergei Lavrov warns Moscow would respond to Western supplies of long-range weapons to Ukraine by stepping up efforts to push Kyiv’s forces further from its border.

Lavrov had to cancel a visit to Serbia after several of its neighbours prevented his plane from passing through their airspace, officials say.

Bulgaria, Macedonia and Montenegro refused a request from Russia for Lavrov’s plane to pass through their airspace on the way to Serbia, behaviour Lavrov has described as “outrageous”.

“The unthinkable has happened,” Lavrov tells an online news conference in Moscow. “This was a deprivation of a sovereign state of the right to carry out foreign policy.”

Italy summons Russia’s ambassador after Moscow alleged the Italian media were waging an anti-Russian propaganda campaign through its coverage of the Ukraine war.

The foreign ministry in Rome says it called in ambassador Sergey Razov to reject “insinuations regarding the alleged involvement of our country’s media in an anti-Russian campaign”.

Ukrainian President Volodymyr Zelensky visits areas of eastern Ukraine including Lysychansk, which neighbours Severodonetsk, and Bakhmut, to the southwest in the Donetsk region of the Donbas.

The presidency says he “got himself acquainted with the operational situation on the front line of defence”.

In his daily evening address after his visit, he says: “I am proud of everyone whom I met, whom I shook hands with, with whom I communicated, whom I supported.”

Ukrainian officials say Russian missiles have hit railway infrastructure sites in Kyiv, in the first such strikes on the capital since April 28.

“The strikes targeted the infrastructure of Ukrainian Railways,” says Serhiy Leshchenko, a member of the company’s supervisory board and adviser to the Ukrainian presidency.

Away from the battlefield, Wales dashes Ukraine’s dreams of reaching its first football World Cup since 2006 with a 1-0 victory.

Before the game in Cardiff City Stadium, the Ukrainian national anthem was applauded by all sides.

US to get 36,000 more monkeypox vaccine doses this week, HHS says