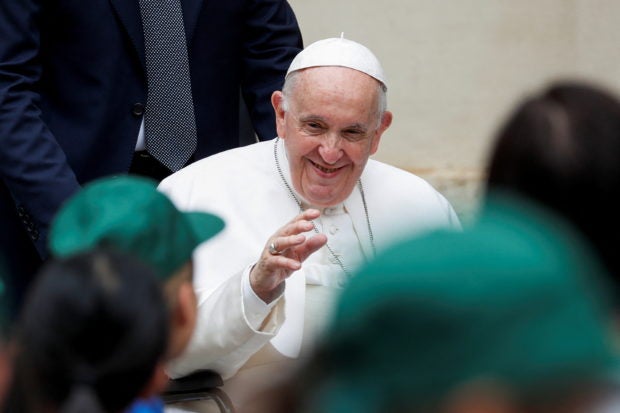 Pope Francis arrives to meet children with disabilities and Ukrainian children who fled their country due to Russia’s invasion, at the Vatican, June 4, 2022. (REUTERS)

VATICAN CITY  – Pope Francis said on Saturday he would meet soon with Ukrainian officials to discuss the possibility of a visit to their country.

Francis disclosed the coming meeting in a question-and-answer session with children in one of the Vatican’s main courtyards.

A Ukrainian boy named Sachar asked him: “Can you come to Ukraine to save all the children who are suffering there now?”

The 85-year-Francis, who has been using a wheelchair because of knee pain, responded that he often thought of Ukrainian children and wanted to visit the country but had to choose the right time.

“It is not easy to make a decision that could do more harm than good to the rest of the world. I have to find the right moment to do it,” he said, according to a Vatican transcript of the event. He did not elaborate.

“Next week I will receive representatives of the Ukrainian government, who will come here to talk, to talk even about an eventual visit of mine there. We’ll see what happens,” Francis said. He gave no further details.

The Ukraine war has forced the Vatican to carry out a delicate diplomatic balancing act, several times offering to mediate an end to the conflict.

Francis has several times implicitly criticised Russian President Vladimir Putin over the invasion but without naming him. He also has used terms such as “unjustified aggression” and “invasion” and has lamented atrocities against civilians.

Yurash told Reuters on Saturday he had no details of the meeting the pope mentioned.