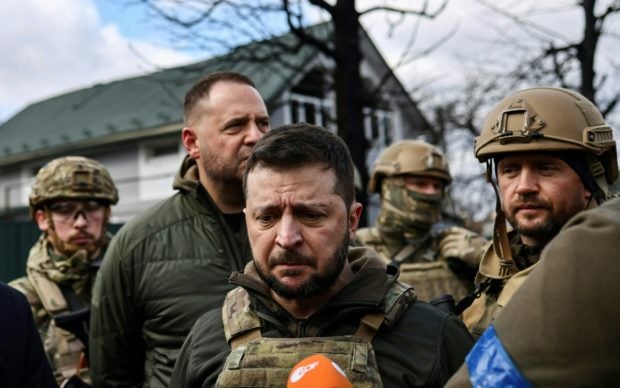 Ukainian President Volodymyr Zelensky (C) speaks to the press in the town of Bucha, northwest of the Ukrainian capital Kyiv, on April 4, 2022. (AFP)

KYIV, Ukraine – Ukrainian President Volodymyr Zelensky said on Friday his country’s military would fend off the Russian invasion, in a video marking 100 days of Moscow’s all-out assault on its pro-democracy neighbour.

“Victory will be ours,” Zelensky said in the video. raineIt included Prime Minister Denys Shmyhal and presidential advisor Mykhaylo Podolyak, recalling an impromptu message they posted outside government buildings at the onset of the war, vowing to remain in the country.

On the 100th day of Russia’s invasion, fighting is raging across the east, where Moscow’s forces are tightening their grip on Ukraine’s Donbas region.

Kyiv earlier had announced Moscow was in control of a fifth of Ukrainian territory, including Crimea and parts of Donbas seized in 2014.

The mayor of the capital said on Friday that Ukrainians “don’t want another 100 days of war” and called for continued “pressure on Putin’s regime”, referring to Russian President Vladimir Putin.

“Yes we need weapons so that we can defend our common values. But we must wage war on the Russian economy so that Russia will finally leave Ukraine in peace,” he said.

“We must economically isolate Russia from the world.”

Ukraine’s foreign ministry released a statement in English saying international help for the country was “the best investment in peace and sustainable development of all mankind”.

The ministry also called for a special court to investigate war crimes in the country, saying, “Russian criminals should be brought before the Tibunal in the same way as it was with the leadership of Nazi Germany.”

Prime Minister Shmyhal earlier said the war was pushing his country closer to Europe while Russia was moving towards “isolation from the developed world”.