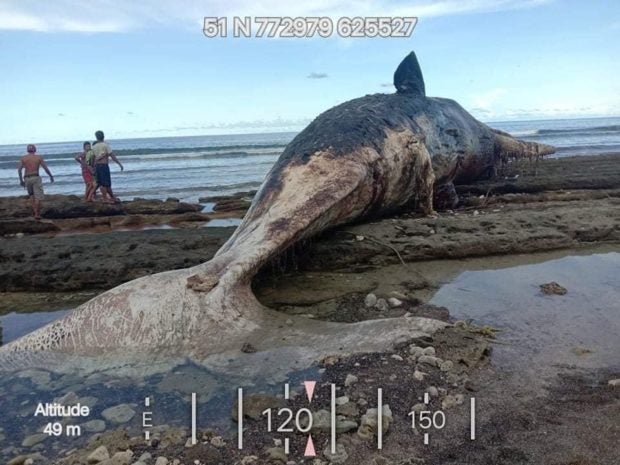 A beached sperm whale was found on the shoreline of Jose Abad Santos town in Davao Occidental on Saturday, May 21, 2021. (Photo from the Facebook page of DENR DAVAO REGION)

The whale — 60 feet (18.29 meters) in length and 9 feet (2.74 meters) in width — had several wounds on its body and could have been already dead when it reached the shore, according to officials of the Department of Environment and Natural Resources (DENR).

Bagani Fidel A. Evasco, regional executive director of DENR, ordered the Provincial Environment and Natural Resources Office (Penro) to cordon off the area where the mammal was found.

“(T)he carcass should be disposed of immediately because its smell can be toxic and hazardous to the community,” Evasco said, telling the provincial office to coordinate with experts in the disposal of the whale.

SC rules in favor of woman who called off wedding

Jose Abad Santos is about 220 kilometers from Davao City — or about five hours by land travel.

The report, however, did not identify the particular sperm whale species as several of these mammals had been found dead in the last 10 years in several areas around Davao Gulf.

A museum here reported in July 2019 that five sperm whales were found dead in areas around the Davao Gulf during the first half of the year.

In 2016, local newspapers reported that some of the beached whales were found to have eaten plastics, an indication that nonbiodegradable waste had been indiscriminately disposed of despite the implementation of the Solid Waste Management Act.

According to this law, waste should be managed and only those that could not be recycled must end up in local government-run landfills or other similar garbage collection units.

The five-year Strengthening Marine Protected Areas to Conserve Marine Key Biodiversity Areas in the Philippines (SMARTSeas PH) project identified the Davao Gulf among the key marine areas that needed to be protected because of its marine biodiversity.

As a project supported by the United Nations Development Programme (UNDP), which ended in 2019, SMARTSeas PH reported sightings of sperm whales around the gulf. Most of the whales that died, however, were beached.

The project called for coordinated efforts among national agencies, local governments, nongovernment organizations, and other groups to protect the marine life of the gulf.

When asked about the latest whale that was beached, lawyer Mark Peñalver, executive director of the environment group Interface for Development Intervention (Idis) here, said they still had to find out the cause of the whale’s death.

“Normally, whales die due to some other causes like age and maybe, injuries but if the cause of death is attributable to human activities such as improper waste management, habitat loss, then that is very alarming,” he said.