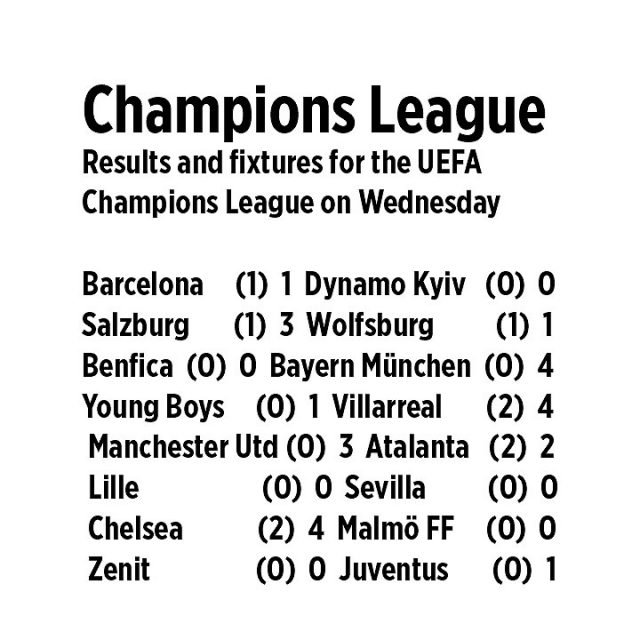 -minute winner as Manchester United came from two goals down to beat Atalanta 3-2 in a pulsating Champions League Group F match at Old Trafford on Wednesday.

After a poor first-half display, with Atalanta taking a 2-0 lead in at the break, Ole Gunnar Solskjær’s team turned the game — and possibly their season — around with a thunderous performance.

The pressure was on Solskjær after Saturday’s 4-2 Premier League defeat at Leicester City and he opted to drop Paul Pogba to the bench, but there was little sign of improvement from that switch.

United were disjointed and dispirited in the opening 45 minutes, but raised their tempo and the volume from the Stretford End with a relentless push to victory that culminated in the Champions League’s record scorer demonstrating his brilliance in front of goal yet again.

Mario Pašalić put Atalanta ahead in the 15

minute, turning in Davide Zappacosta’s low ball from close range and United, with just one win in their last five games in all competitions, looked drained of belief.

minute with Merih Demiral rising at the near post to glance in an angled header from a Teun Koopmeiners corner.

Fred and Marcus Rashford missed good chances for United before the break, but the home side got themselves back into the game in the 53

A clever ball from Bruno Fernandes allowed Rashford to cut in from the left and he picked his spot with a shot into the far corner.

Scott McTominay struck the post after connecting with Ronaldo’s cross, but although United were pushing for a leveler, the Italians were still a threat and the hosts were thankful to keeper David De Gea for a superb double save to keep out a drive from Duván Zapata and follow-up from Ruslan Malinovskyi.

The pressure paid off for United, though, when they drew level with Harry Maguire drilling the ball home at the back post after the static Atalanta defense failed to intercept a Fernandes ball across the box.

Then came the winner as Luke Shaw whipped in a superb cross from the left and Ronaldo rose superbly, timing his jump and his header perfectly to power the ball past Musso.

“I was right behind him. His leap, his timing, it was perfect right in the corner,” Maguire said.

“We see it day in, day out in training and in the goals he has scored throughout his career. He has come up with a massive goal for us again in the Champions League,” he added.

“We got the goals we needed and deserved and I think we deserved the win in the end. Yes, we made it difficult, but it is a tremendous victory in the end.”

United tops the group after three games on six points with Atalanta and Villarreal two points behind. —