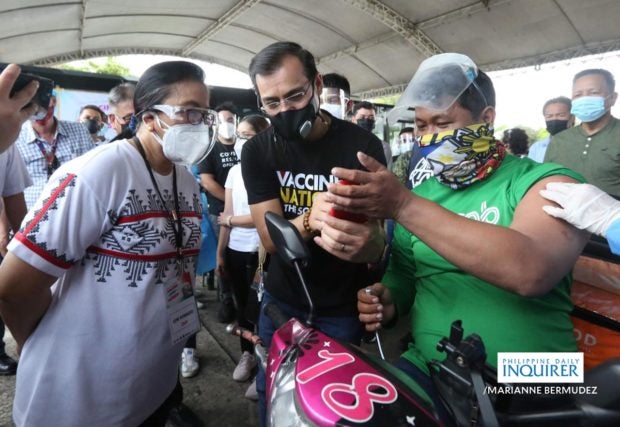 Within 1Sambayan, the two top possible bets of the unified opposition are Vice President Leni Robredo and Manila Mayor Isko Moreno. In this file photo, taken on Tuesday, June 22, 2021, Robredo and Moreno are overseeing the drive-thru vaccination setup by their offices at the CCP Complex in Manila. (File photo by MARIANNE BERMUDEZ / Philippine Daily Inquirer)

MANILA, Philippines — Vice President Leni Robredo and Manila Mayor Franciso “Isko Moreno” Domagoso are among 1Sambayan’s top contenders to lead the unified opposition against the administration in the May 2022 presidential election.

1Sambayan convenor Etta Rosales said Monday it would only be a matter of days before the coalition would come up with its endorsement for a presidential candidate.

“In the majority of sectors within 1Sambayan, they don’t want to have only one [candidate]. It’s also divided. But those who are pro-VPL — Vice President Leni — are strong. But then there are those coming out for Isko,” Rosales said, speaking partly in Filipino, in an online forum.

The filing of candidacies for next year’s elections is from Oct. 1 to 8.

While Robredo and Moreno were the leading contenders, Rosales said doors remained open to other choices. Sen. Manny Pacquiao, who announced on Sunday his plans to run for president, was also under consideration.

The 1Sambayan seeks to field a single slate of national candidates who will run against President Rodrigo Duterte’s chosen successor and other bets.