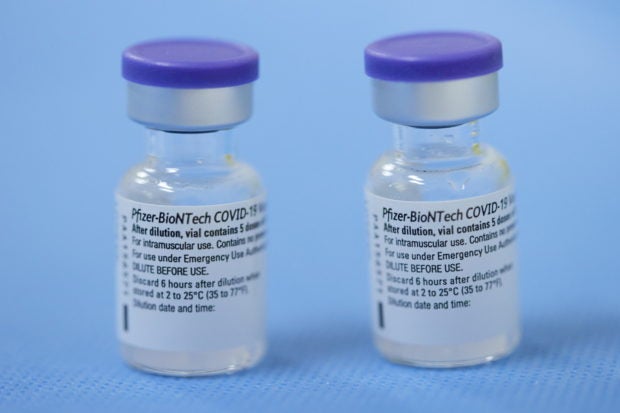 FILE PHOTO: Vials of the Pfizer-BioNTech vaccine are pictured in a vaccination center in Geneva, Switzerland, February 3, 2021. REUTERS/Denis Balibouse

An advisory panel to the U.S. Centers for Disease Control and Prevention (CDC) on Monday unanimously recommended the Pfizer Inc and BioNTech SE COVID-19 vaccine for people age 16 and older, an important step that could help accelerate vaccine mandates in the United States.

The Food and Drug Administration last week granted full approval to the vaccine that was previously available under the agency’s emergency use authorization (EUA), which had allowed the shots to be rolled out rapidly to Americans.

Health officials hope the formal approval and CDC recommendation will spur more Americans to get vaccinated. With full FDA approval, some companies and states have begun mandating COVID-19 vaccination.

Vaccination rates remain low in many parts of the United States, contributing to a big surge in hospitalizations due to the highly contagious Delta variant of the coronavirus.

Some panel members said increasing vaccinations before the fall season was critical to getting children back to schools safely.

“Everyone who has anything to do with a child that is not old enough to be vaccinated yet should be vaccinated for the benefit of their children,” said Dr. Helen Keipp Talbot, an infectious disease specialist who was part of the panel.

Regulators have authorized a third dose of the Pfizer/BioNTech and Moderna vaccines for those with weak immune systems, and the U.S. government has said it plans to make booster doses available to more Americans in September.

The CDC advisers are considering an approach to boosters that would focus on preventing severe disease among those most at risk – residents in long-term care facilities, other older adults and healthcare workers – much like the original vaccine rollout.

CDC staff presented available data on the need for boosters and said, at this point it may be difficult to determine whether immunity from prior vaccination is waning over time or if the vaccines are just less able to prevent infection by the highly-transmissible Delta variant.

Several panel members expressed concern about the White House announcement of a booster policy starting in September, even before the vaccine advisory panel had seen the evidence or determined that such a campaign was needed.

Members of the vaccine advisory working group, which is shaping the agency’s approach to boosters, stressed that the top U.S. priority remains getting shots to the unvaccinated.

Another meeting will be scheduled in mid-September to discuss boosters.

At Monday’s meeting, the CDC reiterated that the benefits of the Pfizer vaccine outweigh potential risks associated with the shots.

New Zealand on Monday reported its first death linked to Pfizer’s COVID-19 vaccine after a woman suffered myocarditis, a type of inflammation of the heart muscle that is a known rare side effect of the vaccine. Health officials there said other factors could have contributed to her death.

There have been no reported deaths among young U.S. adults who developed myocarditis after getting the Pfizer/BioNTech vaccine, CDC said.