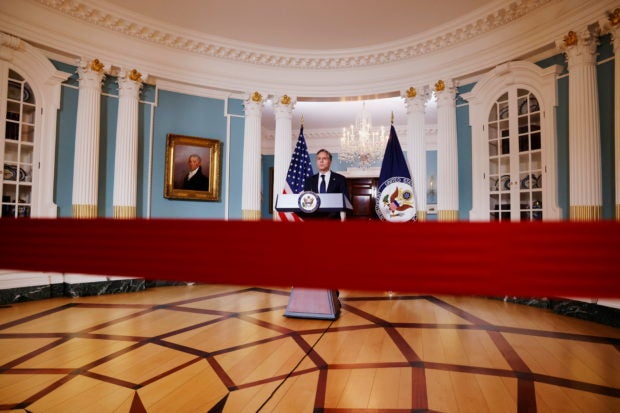 WASHINGTON — The United States has suspended its diplomatic presence in Afghanistan and will conduct its operations out of Qatar, U.S. Secretary of State Antony Blinken said on Monday, adding Washington will press ahead with its “relentless” efforts to help people leave the country, even after its troops have pulled out.

Blinken’s statement comes after the departure of the last U.S. plane, leaving behind thousands of Afghans who helped Western countries and might have qualified for evacuation.

The operation came to an end before the Tuesday deadline set by President Joe Biden, who has drawn heavy criticism from both Democrats and Republicans for his handling of Afghanistan since the Taliban made rapid advances and took over Kabul earlier this month.

In his remarks, after which he ignored shouted questions from reporters, Blinken said Washington would conduct its Afghanistan diplomacy including consular work and administering humanitarian assistance out of Qatari capital Doha, with a team headed by Ian McCary, the deputy chief of the U.S. mission to Afghanistan.

“A new chapter of America’s engagement with Afghanistan has begun. It’s one in which we will lead with our diplomacy,” Blinken said and added: “We will continue our relentless efforts to help Americans, foreign nationals and Afghans, leave Afghanistan, if they choose.”

He said close to more than 100 Americans were still believed to remain in Afghanistan who wanted to leave but Washington was trying to determine their exact number. Over 6,000 Americans have been evacuated.

More than 122,000 people have been flown out of Kabul since Aug. 14, the day before the Taliban – which harbored the al Qaeda militant group blamed for the 2001 attacks on New York and Washington – regained control of the country.

As the fate of the Kabul airport, the country’s main gateway to the rest of the world, remained uncertain following the U.S. departure and Taliban takeover, Blinken said Washington was working to find ways to help Americans and others who may choose to depart via overland routes.

“We have no illusion that any of this will be easy or rapid,” he said.