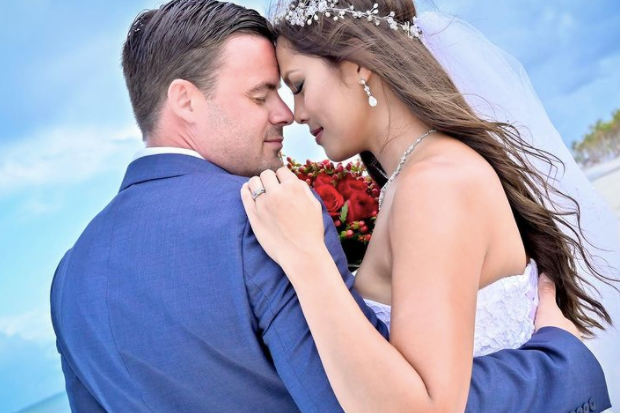 Juliana Palermo has tied the knot with her non-showbiz American partner Joel Crabtree in an intimate wedding at Cancun, Mexico.

The former actress made the announcement by showing a photo of herself and Crabtree in their wedding attire on her Instagram page today, Aug. 31. Palermo donned a white strapless dress while Crabtree wore a blue suit for the ceremony.

“Everything I ever prayed for. Hi, crush,” she told Crabtree. “I let go and loved myself first. This is ultimately what [led] me to a man who accepted all of me. This moment made sense of it all.”

Palermo also showed a beachside photo with her two sons, who also wore blue suits for the wedding, as seen on her Instagram page, also today. It appears the wedding was attended by only a few friends and family.

“Trust that the Lord will grant all that our [hearts truly desire] if we follow His guidance. This is everything I lived for,” she said.

to Crabtree just last Sunday. Crabtree proposed to her at the Costa Mujeres beach in Cancun, Mexico.

The couple has a one-year-old son together named Jack Alexander. Palermo has another child named Ace Christian from a past relationship.

Palermo previously appeared in several TV shows and movies before leaving showbiz. Her projects include the romantic drama movie “Faces of Love” and the comedy film “Kasal, Kasali, Kasalo.”


Yam Concepcion gets married to longtime BF in New York


Will the curse of ‘Dune’ be lifted in Venice?