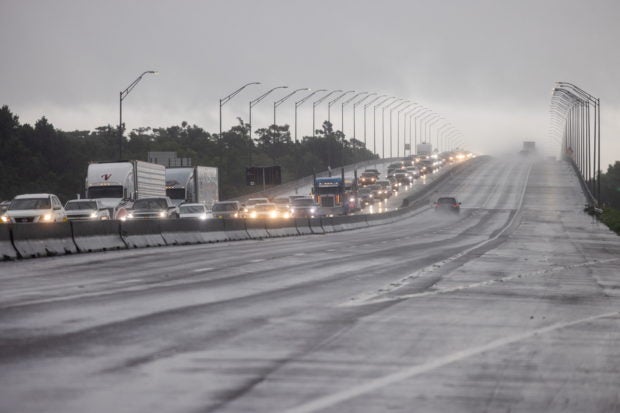 Traffic moves bumper to bumper along I-10 west as residents arrive into Texas from the Louisiana border ahead of Hurricane Ida in Orange, Texas, US., Aug. 28, 2021. (REUTERS)

NEW ORLEANS — Alarmed aid workers raced to get New Orleans’ homeless off the streets on Sunday ahead of fast-moving Hurricane Ida, a complicated, last-minute push made all the more difficult by a severe outbreak of COVID-19 cases in the state.

At shelters, workers were giving masks to those brought in from the streets, while also checking temperatures and administering rapid COVID tests. Per 100,0000 people, Louisiana is seeing the nation’s third-highest outbreak of the virus.

The fast-moving storm left little time to spare. Ida was set to make landfall in Louisiana as Category 4 hurricane later on Sunday, bringing flooding and winds of 150 miles per hour (240 kph) to parts of the Gulf Coast.

Still, some homeless shelter residents were too fearful of catching COVID-19 in a crowded shelter to move indoors.

Greg King, 62, said he would rather risk being outside than contract the Delta variant. King was one of about a dozen homeless people under the Pontchartrain Expressway on Sunday morning.

“I got my shot but I’d rather not go to the shelter. All the guys in the shelter – they just don’t wear masks,” King said.

Jerry Ruffin, a manager at Ozanam Inn, a men’s shelter, said the facility currently housed 54 people, slightly more than half of its capacity.

The center had cut capacity as COVID-19 cases surged but opened up more ahead of the storm.

New Orleans Mission, another shelter, was near its 225 person capacity and said the city had been bringing in residents.

Willie Hughes, 65, moved to New Orleans Mission on Friday, despite concerns about COVID-19.

“I still wear my mask just in case,” Hughes said.