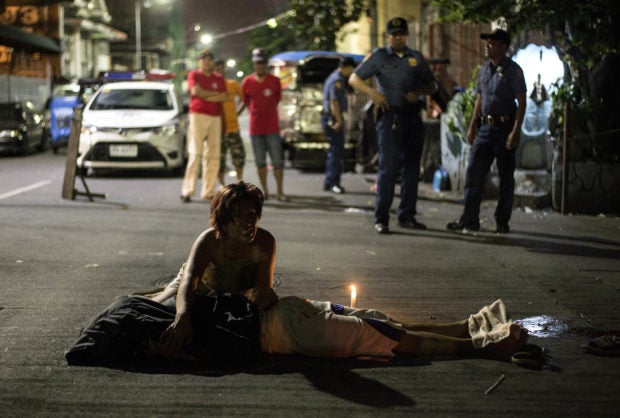 PIETA Nanette Castillo grieves over the dead body of her son Aldrin, an alleged drug user killed by unidentified assailants in Manila in this 2017 photo. —AFP

Total crime volume in the Philippines dropped by nearly half, or 49.43 percent, according to the Philippine National Police (PNP), a report by Philippine News Agency (PNA) last February said.

The PNA report quoted Maj. Gen. Marni Marcos, head of the PNP Directorate for Investigation and Detective Management (DIDM), as saying the “significant decline” in what Marcos said were eight focus crimes was due to the enforcement of COVID lockdowns nationwide.

Last Friday, at the launch of Global Coalition of Lingkod Bayan Advocacy Support Groups and Force Multipliers in the PNP headquarters in Camp Crame, Duterte said civilian groups should be armed to help police.

“If you have this coalition, you have a list of people who are there who can arm themselves. I will order the police if you are qualified, get a gun and help us enforce the laws,” multiple media reports quoted Duterte as saying at that event.

The two statements—from the PNP last February and Duterte just last Friday—seem to contradict each other and draw this question: If crime volume has gone down significantly, what requires civilian armed groups to join the anti-crime campaign?

“The proposal to arm them is purely for their own protection, to defend themselves,” said Eleazar when sought to react to Duterte’s statement.

“The PNP itself will not allow each and every one of them to engage in the actual fighting of criminal elements,” Eleazar said.

But the President’s statement raised alarm among human rights groups, led by Karapatan which had earned the ire of Duterte who had called the group a communist front.

Arming civilian anti-crime groups, Karapatan said in a statement, “will further weaponize these groups as paramilitaries which have a long, bloody history of human rights violations.”

The group said these groups would serve “the administration’s whole-of-nation approach” in counterinsurgency which is “a tactic that merely uses the population to subvert civilian authority for militarist and fascist objectives and ends.”

“Employing and arming so-called civilian volunteers, mobilized for the government’s sham drug war and war on dissent, will only promote and worsen the climate of impunity in the country,” Karapatan said.

The proposal to arm civilian anti-crime groups came months after Sen. Richard Gordon demanded to know why killings perpetrated by so-called riding-in-tandem, or pillion-riding, assailants continued to persist and are being committed with impunity.

Last February, citing data from the PNP, Gordon said from 2016, the first year in office of Duterte, until Jan. 31, 2021, at least 19,086 killings had been perpetrated by pillion-riding assailants.

Gordon raised the data as the Senate blue ribbon committee, which he chairs, investigated the implementation of the Motorcycle Crime Prevention Act. 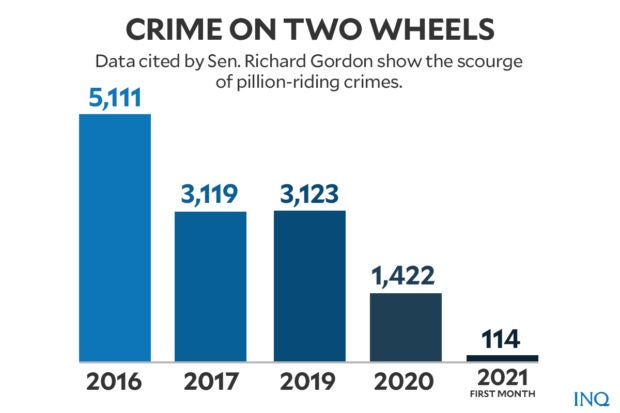 “Thousands of our people, thousands are already killed by riding-in-tandem suspects,” he said partly in Filipino at one hearing of his committee, as he showed pictures of crimes committed by motorcycle-riding suspects.

Some of the cases cited by Gordon were the killings of:

• Jimmy Tabura, a former Inayawan village watchman, who was killed on Jan. 2 in Cebu. He was shot in the face. Police said the gunmen fled on a motorcycle.

• Joseph Labonera, a village watchman in Floridablanca, Pampanga, who was shot and killed last Jan. 4 by unidentified gunmen.

• Noel Peraren, a tricycle driver, who was killed by unidentified assailants at the village ofPahanocoy, Bacolod City last Jan. 6.

Of the total, 10,046 cases remain unsolved and are “still under investigation”, former Philippine National Police (PNP) chief Gen. Debold Sinas said last February. “Out of these we have solved a total of 9,040 or only 48.87 percent is solved among those cases,” Sinas said. 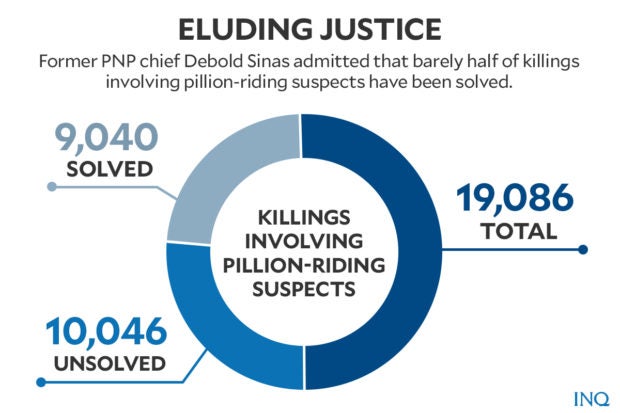 The Commission on Human Rights (CHR) said “arming civilians without proper training, qualification, and clear lines of accountabilities may lead to lawlessness and proliferation of arms, which may further negatively impact the human rights situation in the country.”

“The President and the PNP are aware of the danger this will cause the volunteers for standing up against criminal elements,” said Eleazar.

He said criminals that endanger the anti-crime volunteers included communist rebels “and the suggestion made was aimed at ensuring their protection—but with an assurance that they will undergo the rules and procedures for civilians to possess and carry firearms.”

In a report in 2020, Karapatan listed the killings of farmers and rights workers, who had fallen victims to red-tagging:

• Nora Apique, a farmer leader of the Kapunungan sa mga Mag-uuma sa Surigao del Sur, who was killed on her way home at 7 pm on March 31, 2020 by a motorcycle-riding gunman at the village of Patong, San Miguel town.

• Zara Alvarez, a paralegal for Karapatan in Negros Occidental, who was walking home on Aug. 17, 2020, when a man wearing dark shorts, shirt, jacket, and black mask, approached her from behind and shot her thrice. The gunman fired thrice again as Alvarez fell to the ground.

• Armando Buisan was at the village of Santa Maria in Quezon province on Nov. 14, 2020 when he was shot and killed by two motorcycle-riding assailants in the midst of relief operations for the victims of a typhoon.

• Dr. Mary Rose Sancelan and her husband Edwin Sancelan were and killed by motorcycle-riding gunmen while on their way home to the village of Poblacion, Dumaguete, Negros Oriental on Dec. 15, 2020. They were rushed to a local hospital, but were declared dead on arrival.

Following outrage over the killings, especially of Alvarez, presidential spokesperson Harry Roque in 2020 dismissed allegations that the government was behind the killings.

“We denounce any form of violence perpetrated against citizens, including activists. We are a nation of laws and violence has no place in any civilized society,” Roque said last year.

Gordon took police to task for the unsolved killings at the hearing of his committee. “While we cooperate with the Executive, we will not cooperate with injustice,” the senator said.