Aquino was laid to rest next to his parents—former Senator Benigno Aquino Jr. and former President Corazon Aquino.

Prior to the inurnment of Aquino’s cremated remains, a funeral mass was held at the Church of the Gesu at the Ateneo de Manila University and presided by Archbishop Socrates Villegas.

During the mass, Villegas said the “best eulogy tribute” for Aquino is to recover and preserve the decency of the country’s leaders. 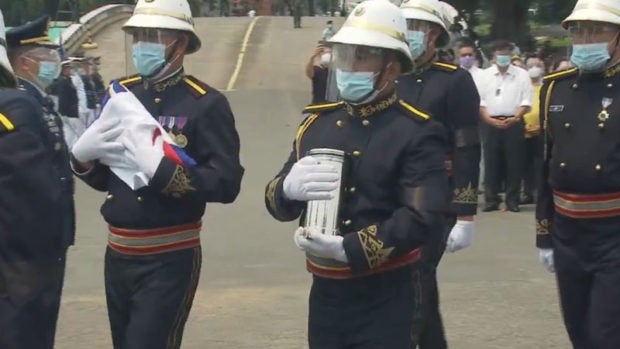 Villegas said that the flags flown at half-mast are not only for the dead president, “but for the dying decent governance.”

“Eulogies have been written and spoken and shared, but the best eulogy tribute we can pay to our dear President Noy is to bring back, recover, preserve, safeguard, and never again compromise our dignity as a people and the decency of our leaders as servants, not bosses,” he added.

Villegas likewise expressed hopes that Aquino’s death would “spark another fire within us to resurrect his example of decency and integrity.”

Ballsy Aquino-Cruz, Noynoy’s sister, said her brother was the type who never wanted to be a “burden” to his family.

(Noynoy never wanted to be a burden. He did not want us to worry and have sleepless nights thinking of him.)

Aquino, who served as the Philippines’ 15th president from 2010 to 2016, passed away in his sleep on Thursday morning.

His death certificate indicated that the cause of his death was renal disease secondary to diabetes.