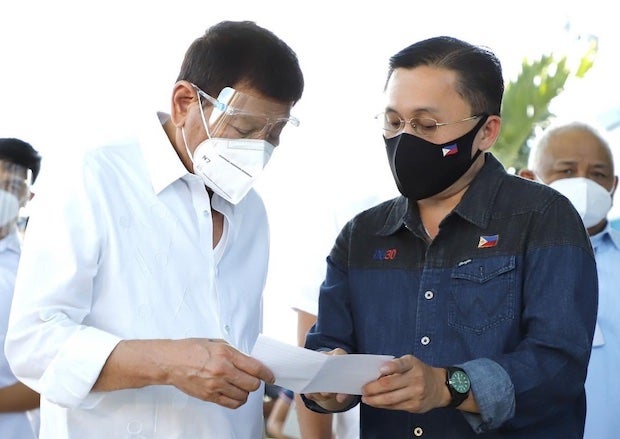 MANILA, Philippines — Around 65 percent or almost two in three Filipinos believe that President Rodrigo Duterte’s state of health is a public matter and should be published for people to know, a survey released by the Social Weather Stations (SWS) on Monday showed.

SWS said that the number of people who think that Duterte’s health is a public issue actually increased by four percentage points based on the data gathered from their September 17 to 20, 2020 surveys.  In December 2019, 61 percent of Filipinos considered the Chief Executive’s state of health as a point of public discourse.

In contrast, only 32 percent of the respondents said that Duterte’s health is a private matter which means that the public should not be informed of everything about it.

“The view that the President’s state of health is a public matter has always been dominant in the SWS surveys. The latest figure is 4 points above the 61% in December 2019 and September 2018,” it added.

The highest percentage of the people who believe Duterte’s state of health should be made public comes from Visayas, with 69 percent.  It was followed by Metro Manila at 65 percent, and then Balance Luzon and Mindanao both with 64 percent.

“This opinion is also dominant across the rest of the basic socio-demographics, ranging from 60% to 70%,” SWS said.

SWS’ survey comes out amid another barrage of rumors concerning the President’s health, as his usual Monday talk to the people last week — which was moved then to Wednesday — were both cancelled.

Malacañang officials and former Duterte aide and now Senator Bong Go clarified that the President is physically fit and healthy, debunking rumors that he suffered a mild heart attack.  Go showed several photos with the President supposedly in Malacañang, the most recent of which showed Duterte riding a motorcycle and playing golf.

According to presidential spokesperson Harry Roque, Duterte only canceled his address as a precautionary measure because several officers from the Presidential Security Group contracted COVID-19.

Earlier, Roque also stressed that there is no need to release a medical bulletin for Duterte, saying that he is not sick.  The President is scheduled to make an address on Monday night.

Duterte’s health has been often discussed after he assumed office in 2016 as the oldest President ever elected in the country’s history.  He has admitted that he had several lingering medical conditions like Buerger’s disease, Barrett’s esophagus, aside from experiencing occasional headaches and spinal issues due to a motorcycle accident.

He has also admitted to taking sleeping pills and Fentanyl, which is 50 to 100 times more potent than morphine.  He also revealed experiencing constipation and having myasthenia gravis, an autoimmune disease that destroys muscle receptors and can result in the drooping of eyelids, or overall weakness.

READ: Duterte’s health has been a recurring issue in 2019

SWS said that the September edition of the survey was done through mobile phone and computer-assisted telephone interviewing (CATI) of 1,249 adult Filipinos, 309 of which came from Metro Manila, 328 from Balance Luzon, 300 from Visayas, and 312 from Mindanao.

The social research firm maintains sampling error margin of ±3% for national percentages, ±6% for Metro Manila, ±5% for Balance Luzon, ±6% for the Visayas, and ±6% for Mindanao.