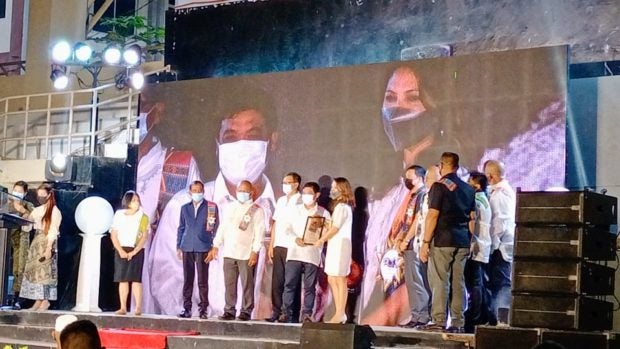 PAGADIAN CITY, Zamboanga del Sur, Philippines — The Dumalinao municipal government in Zamboanga del Sur recognized its, dead and living, who have displayed heroic deeds on Friday evening, April 9, as part of the observance of Araw ng Kagitingan (Day of Valor).

Dumalinao Mayor Junaflor Cerilles said it was only fitting to give the modern-day heroes recognition so they could serve as role models for the current generation to strive and offer themselves in the service of the community.

Araw ng Kagitingan commemorates the sacrifices of Filipino soldiers in the fight to regain the country during the Japanese Occupation in the Second World War.

Among the honorees were soldiers and police officers and medical frontliners, whether regular workers or volunteers, who have been fighting the coronavirus pandemic for over a year now.

“Ang mamatay ng dahil sa sa iyo at ang magmahal ng dahil sa iyo [To die for you and to love for you]. We acknowledge and honor the sacrifices and efforts made by our fallen heroes and also to our modern-day heroes,” Cerilles said.

“We give our snappiest salute to these individuals who stood up, left their families and homes and risked their lives to combat this deadly virus,” she added.

Also honored were two members of the Special Action Force of the Philippine Nationa Police who were among 44 commandos killed on Jan. 25, 2015, in a botched operation to ferret out Malaysian terrorist Zulkifli Bin Hir alias Marwan in Mamasapano, Maguindanao.

The families of Senior Inspectors John Garry Erana and Rennie Tayrus received the awards on their behalf.

Another soldier, Private First Class Charlou Manla of the 97th Infantry Battalion was recognized among the fallen heroes as he paid the ultimate sacrifice in a firefight with communist rebels while on a security patrol in the hinterlands of Bayog town, Zamboanga del Sur on April 24, 2020.

The honorees were given plaques of recognition.