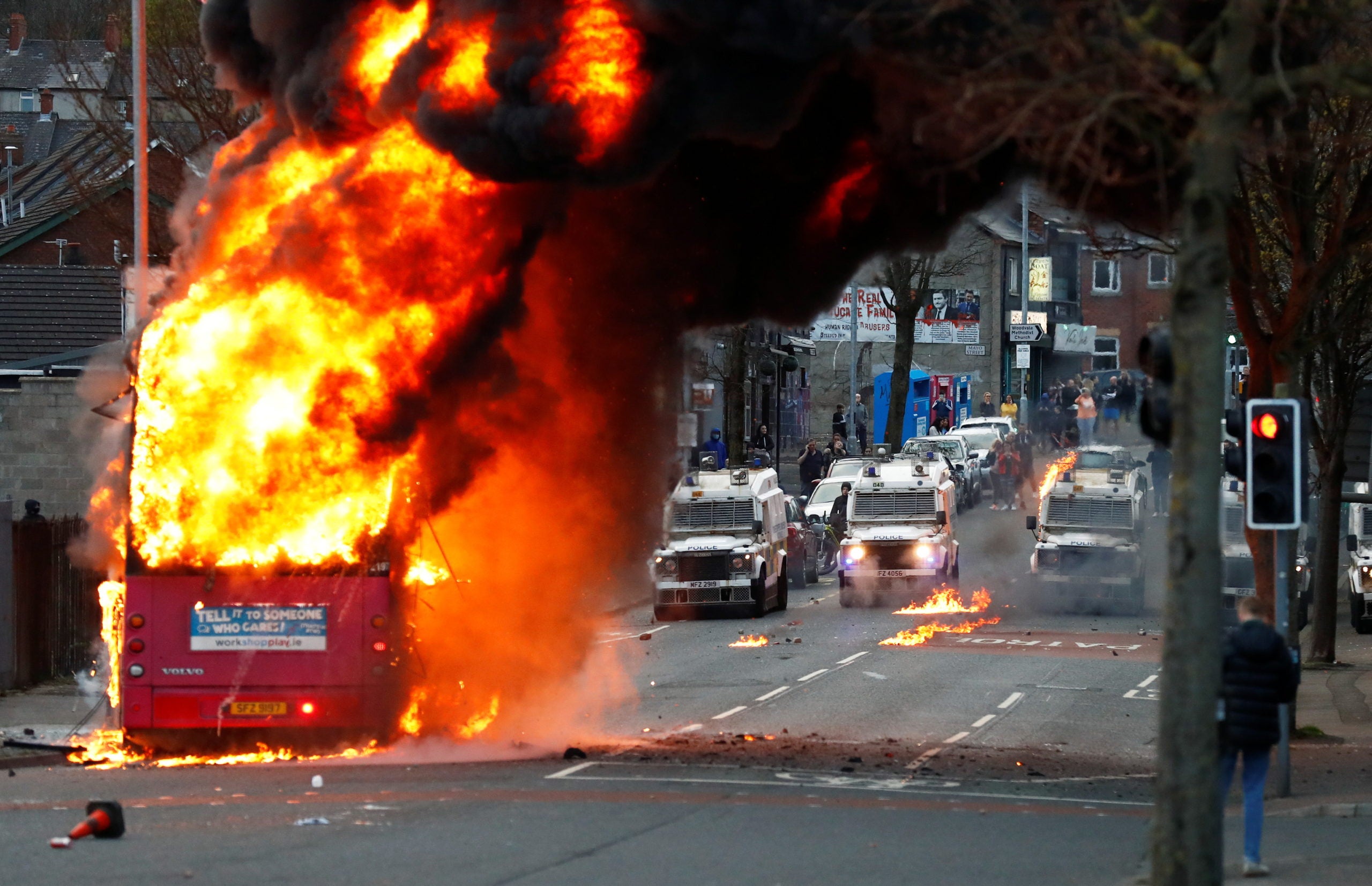 Police vehicles are seen as a hijacked bus burns on The Shankill Road as protests continue in Belfast, Northern Ireland, April 7, 2021. REUTERS/Jason Cairnduff

BELFAST  — Crowds of youths in a pro-British area of Belfast set a hijacked bus on fire and attacked police with stones in the latest of a series of nightly outbreaks of violence that began last week.

British Prime Minister Boris Johnson said he was “deeply concerned” by the violence, which has injured dozens of police officers in recent days as protesters burned cars and hurled petrol bombs at police.

The violence comes amid growing frustration among many in the pro-British unionist community at new trade barriers between Northern Ireland and the rest of the United Kingdom that resulted from Britain’s exit from the European Union.

The pro-British Democratic Unionist Party (DUP) has also pointed to a decision by police not to prosecute Irish nationalists Sinn Fein for a large funeral last year that broke COVID-19 regulations.

Sinn Fein in turn has blamed the DUP for stoking tensions with their staunch opposition to the new trading arrangements and their call in recent days for the region’s police chief to step down.

The Police Service of Northern Ireland has said some of the violence was influenced by “criminal elements” who helped to orchestrate the attacks.

The violence on Wednesday took place near the Shankill Road in west Belfast near a so-called “peace wall” that divides the community from the Irish nationalist stronghold of the Falls Road, where groups of youths also gathered.

The walls and fences were built between the two communities to prevent clashes during three decades of sectarian violence in Northern Ireland that largely ended with a 1998 peace deal.

“I am deeply concerned by the scenes of violence in Northern Ireland,” Johnson wrote in a Twitter post. “The way to resolve differences is through dialogue, not violence or criminality.”

The leaders of Northern Ireland’s largest political parties Sinn Fein and the DUP both condemned the violence, pointing in particular to the bus hijacking and an attack on a photojournalist from the Belfast Telegraph newspaper.

“These actions do not represent unionism or loyalism. They are an embarrassment to Northern Ireland,” DUP leader Arlene Foster wrote in a Twitter post that went on to describe rivals Sinn Fein as “the real lawbreakers.”