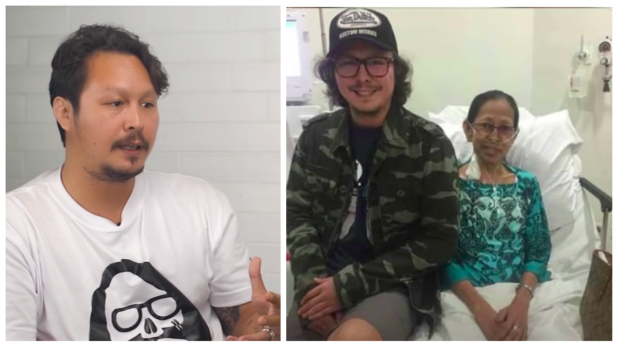 Baron Geisler with his mother. Images: screengrabs from YouTube/Celestine Gonzaga-Soriano

Baron Geisler turned emotional while talking about his biggest regret in life — that his mom died before he became “clean.”

Geisler recalled being with his mother as she took her last breath, in a conversation with Toni Gonzaga on her YouTube vlog yesterday, April 4.

“I was preparing to go to a five-day retreat and I was sober for a while. So I went to her room. Nakaputi ako nito, long hair, may bigote (I was wearing a white shirt, long hair, had a mustache),” the actor recounted. “I said, ‘Mom, Baron here. Good boy. I’m gonna go to this retreat, I’ll see you when I get back.’”

He recalled that his mother tried to stand up and reach out to him as if she was trying to say something.

But while he could joke about the event now, he said that he felt there was something wrong with his mother at that time. He said he took a penlight, checked his mother’s eyes and saw how per pupils slowly dilate as she passed away.

When Geisler talked about his mother’s death, he could not help but tear up and reveal that it was the moment of his biggest regret.

“My dream kasi no’ng time na ‘yon (during that time) was for my mom to see me clean,” he stated, adding that he now takes comfort at the thought that his mother must be proud of the person he is striving to become.

Geisler added that he would often address his mother even after she died. He also recognized that people would still doubt if he is really going to stay sober. For him, doubters will always be there, but he swore that he is committed to staying sober and for a good reason.

“My recovery is not for Jamie, it’s not for Tali. It’s for me. Because how can I lead a family if I am not ready, if I am not whole?” Geisler explained. He also hopes to become a “respectable man” that his daughter will look up to in the future.

Aside from the actor’s biggest regret, Geisler and Gonzaga also talked about his issues with anger management, his family life and his experience with rehabilitation.

Geisler has been open to talk about his initial denial of battling depression, drug use and alcoholism. Last month, in an interview with Philippine Daily Inquirer, he said he was afraid of going “crazy again” and being put in jails and institutions. He also believes sobriety will lead him and his family to more blessings. JB