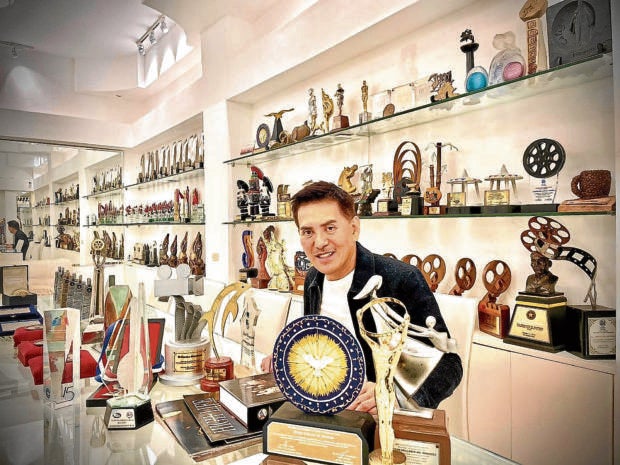 Winning is good promotion. To many, an award is an award, and trophies are symbols of prestige, and of society’s respect, regardless of the name and fame of the film award-giving body that confers it—whether it’s a local entertainment award, critics award or industry award. There’s also the general assumption that a trophy often equates to cash rewards; that it will raise your talent fee; that it means you are the best in the business.

Of course, that distinction is only good until the next year’s bestowment. Like any other person, I felt elated especially by the awards I received from renowned bodies as a beginner. I remember a film awarding event where I vied for the Best Production Design award—of the five films that were nominated, three had my name. Of course I won, and bested myself too. But when I know I did all I could for all these films, who can say that one is better than the other? In a competitive industry like ours, an award from a recognized body can help the recipient, give him some leverage when dealing with other artists or employers, so he will be treated more fairly. Workers deserve respect, but people tend to look first at those who hold the glittering symbol of achievement before others who may be as qualified. Cash awards? Not a lot.

According to its merit

After years of exposure to competitions and award-giving bodies, I understand that though nothing is ever devoid of politics or bias-free, there are legitimate and credible award-giving bodies—where members of the jury are picked based on strong credentials, and the criteria are strict.

Here, a film has the chance to be judged according to its merit—for art and craftsmanship. A film may be maligned as political propaganda, another may be marketed as an innocent, tender film, but are they ready to honestly answer the question of whether which film is superior? Or whose craftmanship is better?

When awarding, it’s important to be clear—if it is the person, his craftmanship or the body of work that was examined. When must judges be subjective, and when must they be objective?

In judging, credibility matters. Judges must have a deep understanding of the craft when evaluating a work of art. An award-giving body has a screening committee and a jury, but what are their subjects of expertise? Is their knowledge from the industry, the academe, or from gossip and social media friends who dabble in films? How do they compare the difficulties involved in creating each film? Then, there are also the pseudo award-giving bodies. They are the money-making type, where those with funding are more likely to win; events that almost anyone can join in and get a medal.

There will also be well-promoted award-giving organizations that are not as credible as claimed, where the critics would rather cling to how they prefer to see the creator, not the art. Some will extol an inept friend over better artists, staking the reputation of the institutions they represent. National or regional, there will be factions with favorites they will fight for. When you see these, it’s not easy to respect the results, but it is what it is.

Recipient or giver, there are those who treat trophies as weapons, a license to demand, to garner support, act superior and feel entitled. To this day, some things have not changed, and perhaps not a lot have serious realizations about awards, the value and purpose of recognition. When I won in Locarno for my first film, I knew it was an honor, but I was just a beginner, still learning and understanding the weight of things. People in and out of the event, even those in cafes stood and applauded when they saw me carrying the Golden Leopard—and I was overwhelmed. I thought I was good, and I was still floating on the way home, though without the similar realization I had afterward in Cannes.

There was the same appreciation in Cannes, but the feeling was different. For “Foster Child,” there was no award, but people were so moved by it that we received a five-minute standing ovation—it seemed to go on forever, and I got very emotional. There was joy as I stood there, but I also felt small, embarrassed—because I realized that it wasn’t me who deserved the applause, but the Filipinos whose stories my film was based on: the foster parents, the ones who love and care for kids who aren’t theirs.

Aside from showcasing our people’s artistry, the filmmaker is just an instrument so those who serve quietly in society, in the streets, will be seen and remembered. This moment sealed my perception about recognition and awards. “What is my purpose here?”

This stayed with me even as our group walked in the Promenade de la Croisette, with people clapping as we proudly wore the Philippine national costume. To this day, I always remind myself of this when I create, when I stand in front of people and present our stories before the world.

I learned to look at a film’s purpose first, the appreciation is secondary. Trophies aren’t always the same as genuine recognition. Awards validate a person’s hard work, but it does not necessarily mean that the recipient is the best, and there will always be another winner in the next competition.

Great people do not always get recognized, and many are never given a trophy in their lives. True artists cannot always participate and succeed in competitions. As for the judges and critics, when you discover their life stories, you’ll understand that they’re only human beings who may be knowledgeable in one thing and not too bright in another. A mind may wonder about the intentions, the identities, biases and vendettas of those behind any event, but at the end of the day, it’s pointless to fuss over them, for me at least; an organization’s motive is their own.

I am happy with my works and accomplishments and aside from my wish to improve filmmaking in the land, I can’t ask for more. I am thankful for any symbol of recognition and acknowledgment that I receive here and abroad, which I keep in a room. It’s possible that I’ve received the highest number of decent film-related plaques and trophies in the country, though these days especially, I cannot help but question some of the trophies I have received.

Competitions can be healthy, and should foster respect in the industry. They can be venues that celebrate and encourage growth. Trophies can inspire us, being in the news may make one feel proud, but other things can motivate us. I think inspiration can be what you feel when you come across something troubling, an uncomfortable situation—which compels us to do something about it.

Year after year, awards will be conferred on individuals. Fair or not, judges will judge. But recognition can be earned in different ways, and acquiring this should not be the main goal for us. Let us always improve, and may we never forget our purpose: That artists and filmmakers are gifted with the means and the talent to be the instruments in telling the story of our people. INQ