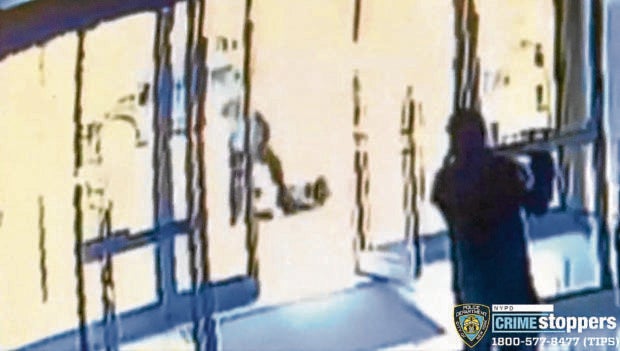 HATE CRIME Security videos capture Monday’s assault on a Filipino woman in Manhattan and the face of the alleged attacker. A suspect was arrested on Tuesday.  File photo from AFP

MANILA, Philippines — The daughter of the 65-year-old Filipino-American recently attacked in New York bared that someone had actually stepped in to distract her mother’s attacker.

In a recent post on a fundraising site, victim Vilma Kari’s daughter, Elizabeth, expressed gratitude to a bystander who she said “yelled and screamed to get the assailant’s attention.” This, however, was not caught on the security camera footage that has gone viral, according to Elizabeth.

“The security video that has gone viral has been the most difficult thing to watch, apart from the crime itself. There were many times that I wish someone would have stepped in.  However, what this video did not capture was that there was someone who was standing across the street that witnessed my mom getting attacked who yelled and screamed to get the assailant’s attention,” she said.

“That is where the video cuts off as the attacker crossed the street to him. To this person, I understand your decision in remaining anonymous during this time. I want to THANK YOU for stepping in and doing the right thing. This gesture of action is what we need in our world right now. I hope one day, my mom and I can thank you personally,” she added.

Vilma was a recent victim of rising hate crimes directed at Asians in the United States. She was on her way to church when the assault happened, according to the Philippine Consulate General in New York.

The video footage showed that the attacker repeatedly kicked her in the head and reportedly yelled “you don’t belong here” at her.

Elizabeth said she put up the fundraiser not only to use the donations for the recovery of her mother, but to also extend support to other victims and groups advocating against Asian American and Pacific Islanders (AAPI) hate crimes.

“This does not take back the pain and trauma my mom has experienced nor will it replace the time to heal as she gets back on her two feet. Apart from using the fund towards recovery for Vilma, my mother would like to support other victims and organizations to further raise awareness to our fellow AAPI community (so that we can continue to a path that educate everyone around us and put an end to these attacks),” Elizabeth further wrote.

According to her, she was in disbelief when she received a call last Mar. 29, informing her that her mother was the most recent target of anti-Asian violence.

“It goes without saying we have all been watching the news and seeing the attacks on Asian Americans since last year, especially on the elderly all around the country and thought to ourselves,” Elizabeth said.

She added that her mother is “humbled by the outpouring of messages and support from not only our friends and family, but from the kind souls all over the world.”

Elizabeth also said Vilma is “safe and in good spirits.”

“Although the healing process will not be easy, she has always been a resilient role model for me. We are hopeful that in time she will make a full recovery,” the younger Kari added.

Elizabeth ended her post with the hashtags: #VilmaBelongsHere, #AAPIBelongsHere and #StopAsianHate.

The Philippine Consulate General in New York has encouraged Filipinos there who have fallen victim or have witnessed any incidents of Anti-Asian violence to get in touch so that immediate assistance can be rendered to victims.