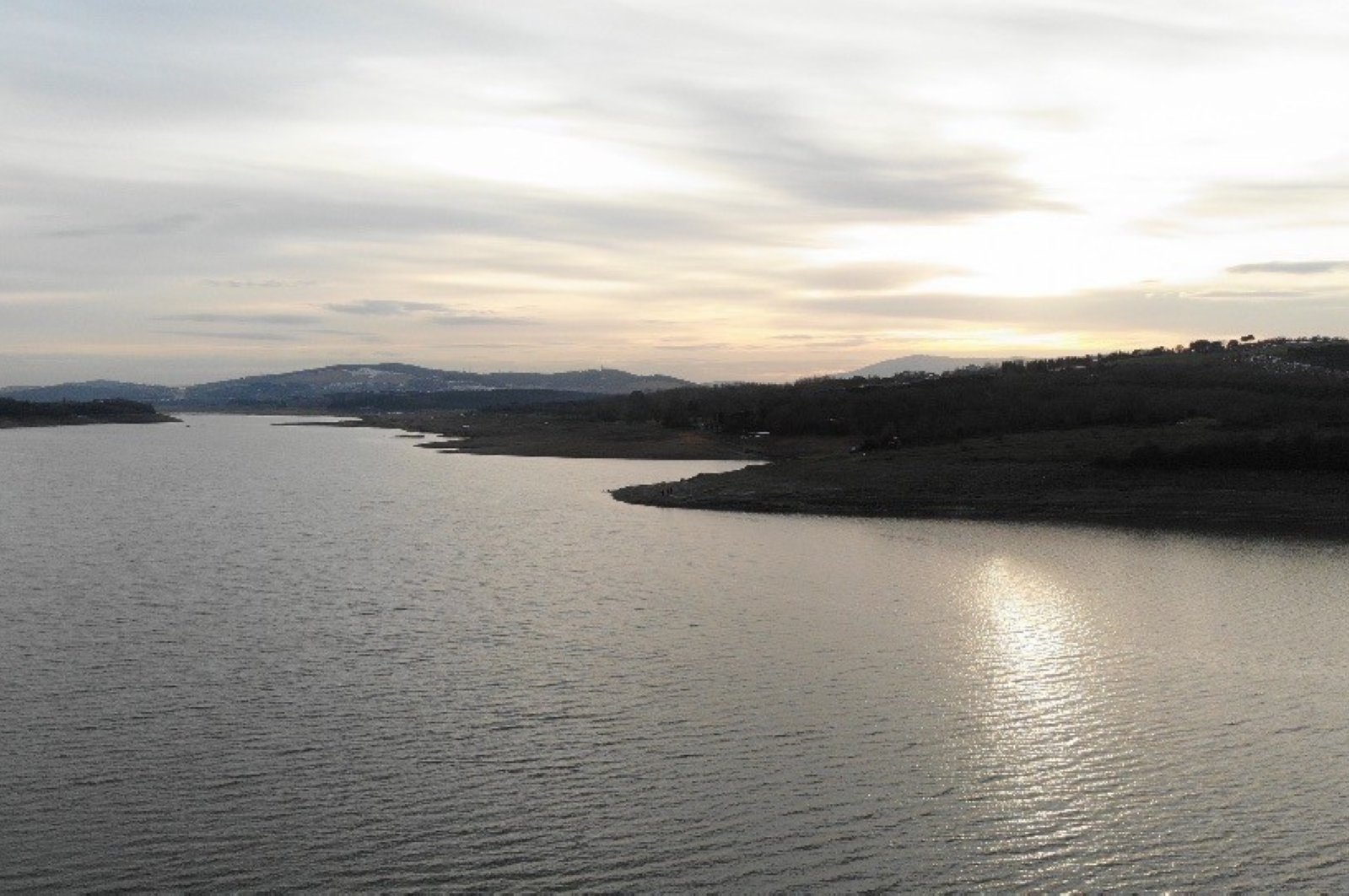 The problem of water scarcity in Istanbul has diminished slightly with dam supplies recently surpassing 32%, data from the Istanbul Water and Sewerage Administration (ISKI) showed Sunday.

Demirören News Agency (DHA) said in a report that previously dry areas in Ömerli Dam have started to fill up with water, according to recent aerial photographs of the dam.

Due to drought, water levels in Istanbul dams dropped to just over 19% two weeks ago, while recent rainfall and melting snow helped push the levels back to over 32%, indicating an increase of 13.2%. The city’s Istrancalar Dam registered the greatest increase, surpassing 55.1% in supply, while Sazlıdere Dam saw the lowest supply figure with 12.7%.

Meanwhile, Istanbul is expecting more snow next week, which is set to contribute to water levels even more.

Water scarcity forces the transmission of water from far-flung sources. In 2020, the city’s water supplies largely relied on Yeşilçay and Melen, two rivers east of Istanbul. Though authorities have assuaged concerns for any disruption to the water grid, data from past years indicates an imminent crisis. On Jan. 4, 2020, for instance, the water level in the dams was at 39.02% and on the same date in 2019, it was 83.25%.

The absence of precipitation that triggers water woes for Istanbul is mainly blamed on climate change that hit inland bodies of water across the country last year. But an expert said that climate change only worsens the existing problem: the higher demand for water associated with a rising population.

Istanbul, a financial and commercial hub that has been a center of attraction for millions throughout its history, has a perpetual upward trend in population increase.

Istanbul Mayor Ekrem Imamoğlu also said last month the city is not currently facing a water shortage problem but also warned about the coming months. “The risk is here. We have to be careful and save water,” he told reporters at a news conference on Dec. 24. “Istanbul went through a dry 2019 and 2020. In terms of precipitation, we have seen less rainfall and snowfall compared with previous years. We are facing a drought risk in 2021, and we are still four years away from the Melen Project,” he said, referring to a large-scale dam project to address the water needs of the city via a water pipeline from the eponymous river.

“We are still able to bring water from Melen and other resources and are discussing whether to open new water wells. The European side of the city is under greater risk, but water transmission (from outside the city) eliminates the water shortage risk even if the next seasons are as dry as these past two years. We believe the problem will be over once the Melen Project is completed. There is no emergency, but the risk lingers, so I call on the citizens to be more cautious while using water, not to use it in excessive amounts,” he said.

Istanbul’s water problem has been such a great concern that unorthodox methods have been proposed to challenge the issue.

The so-called “rain bomb,” or “cloud seeding,” method has also been floated, which some experts say is more or less a hoax, or at best, a very ineffective way to produce rain.

Cloud seeding involves spraying fine particles of silver iodide and dry ice into a cloud system. The dispersal is done by either aircraft, rockets or generators on the ground.

The silver iodide draws moisture to itself, allowing the cloud’s water vapor to condense into droplets and produce rain.

While the process is discreetly used in more than 50 countries, from Mali to India and Puerto Rico, scientists, however, debate its effectiveness.

Scientists and academicians remain on the fence about whether cloud seeding is effective in producing a statistically significant increase in precipitation, with studies offering conflicting results.

A study by Tel Aviv University in 2010 said cloud seeding showed little, if any, impact on amounts of precipitation. On the contrary, another study in the U.S. state of Wyoming that ran from 2005 to 2014 reported an increase in snowfall of 5% to 15%.

The method was also used by the Chinese government during the 2008 Olympics to try to avoid rain during its spectacular opening ceremony, by forcing rain out of clouds before they reached Beijing. It remains disputed whether the process was effective.

While scientists continue to fiercely discuss the effectiveness of cloud seeding, it seems Istanbul will have to rely on Mother Nature for salvation for the time being.

Though alarming, the threat of drought is not exclusive to Istanbul as other cities report decreasing water levels in dams, from Edirne in the northwest to Izmir in the west. The government drafted an action plan which is expected to come into force this year. The plan aims to introduce measures to increase the efficient use of water and curb the decline in water resources in underground dams.

Around 150 dams will be built in line with the plan to prevent the vaporization of underground water. Dams will be built where water preservation is needed, and each is expected to cost up to TL 10 million (around $1.2 million). The municipalities will be supported in their infrastructure projects to replace old water pipes that cause wastage of water. The plan also includes a public awareness campaign to encourage more efficient use of water for daily needs like bathing.