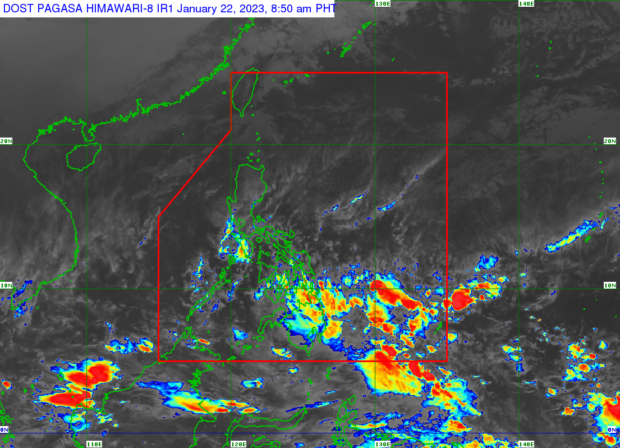 MANILA, Philippines — Cloudy skies and rain will continue to prevail in several parts of the country on Sunday due to the effects of several weather systems, including the trough or extension  of a low pressure area (LPA) outside the Philippine area of responsibility (PAR), the Philippine Atmospheric, Geophysical and Astronomical Services Administration (Pagasa) said.

(Cloudy skies and scattered rains, lightning and thunder will prevail in parts of the Bicol region as well as in Quezon, Marinduque and Romblon due to the shearline.)

Cloudy skies with rain are likewise expected in Cagayan Valley, Cordillera Administrative Region, as well as Aurora due to the northeast monsoon, but the rest of Luzon, including Metro Manila, will have partly cloudy to cloudy skies with possible rain showers.

The trough of an LPA outside PAR will bring rain to parts of Eastern Visayas and the Caraga, Davao regions in Mindanao.

The rest of Visayas and Mindanao, meanwhile, will have partly cloudy skies with chances of rain due to isolated thunderstorms.