THE PHILIPPINES should focus on measures to boost agricultural productivity and adopt a less protectionist stance to ensure food security and support economic recovery from the pandemic, according to experts.

“We should spend money on productivity, not on price support, because it is short term and it is not sustainable. It is high time that we put the money behind productivity enhancing measures to help farmers and bring down trade barriers,” Monetary Board member V. Bruce J. Tolentino said at the BusinessWorld Economic Forum Forecast 2023 in Taguig City on Tuesday.

Mr. Tolentino, an economist and former deputy director-general at the International Rice Research Institute, said there is a need to bring tariffs down and remove protectionist measures to be able to “achieve lower levels of inflation and to enable people to get food at a competitive price.” 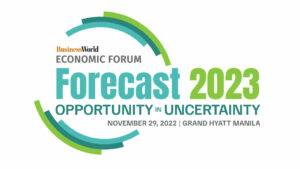 Supply shortages, agricultural damage from typhoons and rising global commodity prices have driven food costs higher in recent months. Inflation soared to a near 14-year high of 7.7% in October, from 6.9% in September and 4% in October 2021.

Mr. Tolentino expressed support for the extension of an executive order that lowered tariffs for rice, corn, coal and pork. Executive Order 171, which is set to expire by yearend, slashed the most favored nation tariff rates on pork, corn, rice and coal.

William S. Co, Philippine Chamber of Commerce and Industry director for its agriculture and fishery committee, said the government should encourage young people to go into the agriculture sector.

Mr. Co said the government should address the high cost of agricultural production.

“We need to encourage small farmers to have more production in terms of rice. If we plant more rice, we lessen the importation. The government should address production. Rice needs water and also, this high cost of gasoline, how can you go into mechanized farming?” he asked.

“We can prosper more if we can align with the government. We should be able to manage imports as well. The government and the private sector need to work hand in hand,” Mr. Sarmiento said.

“There is a lot of optimism because the government is putting a lot of importance on agriculture which I’ve never seen before,” he added.

President Ferdinand R. Marcos, Jr., who also heads the Agriculture department, has made it a priority to boost domestic production, particularly rice and corn.

The agriculture sector contributes about a tenth to the gross domestic product.

“Our immediate focus is creating legislation that will help the government boost domestic demand and increase the competitiveness of domestic production to sustain further economic recovery,” he said in his keynote speech at the BusinessWorld Economic Forum.

He said the country is now in the first stage of economic recovery and is headed in the right direction.

“Now is the time to invest in the Philippines. The best is yet to come. The Philippines will soon become the favorite investment destination in Asia,” he added.

The Philippine economy expanded at a faster-than-expected 7.6% in the third quarter, bringing the nine-month average to 7.7%.

In his keynote address at the forum, Finance Secretary Benjamin E. Diokno said the economy is on track to meet the Development Budget Coordination Committee’s growth assumption of 6.5-7.5% this year.

“The Philippines is recovering and we anticipate the labor market will continue fueling domestic demand. This is an impressive feat considering that we are facing unprecedented challenges in the global market, like high inflation and supply chain issues,” he said.

The IMF sees the Philippine economy expanding by 6.5% in 2022, before slowing to 5% next year.

“But we do see growth slowing in 2023 as a confluence of global shocks from Russia’s war on Ukraine, commodity price shocks, and a recession in major trading partners will weigh on the economy to trade and price shocks,” he said in a recorded message at the forum. “In the context of the negative shocks that we have, that have headed in the Philippines and the global economy, this is still a robust recovery.”

“The past years have clearly demonstrated our ability to bounce back from the blows of black swan events. That gave way to major disruptions and systemic shifts. We were tested but still managed to innovate,” he said. — Revin Mikhael D. Ochave