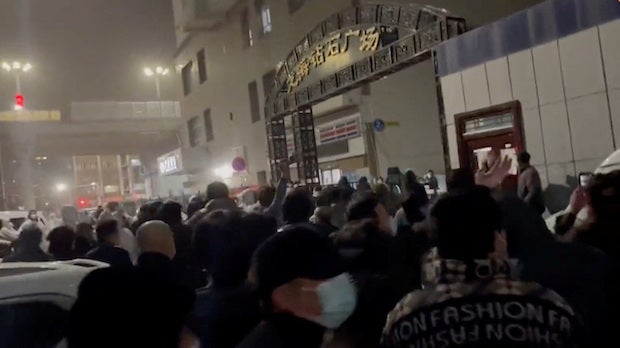 Public anger in China towards widening COVID-19 lockdowns across the country erupted into rare protests in China’s far western Xinjiang region and the country’s capital of Beijing, as nationwide infections set another record.

Crowds took to the streets on Friday night in Xinjiang’s capital of Urumqi, chanting “End the lockdown!” and pumping their fists in the air, after a deadly fire on Thursday triggered anger over their prolonged COVID-19 lockdown according to videos circulated on Chinese social media on Friday night.

Videos showed people in a plaza singing China’s national anthem with its lyric, “Rise up, those who refuse to be slaves!” while others shouted that they wanted to be released from lockdowns.

Reuters verified that the footage was published from Urumqi, where many of its 4 million residents have been under some of the country’s longest lockdowns, barred from leaving their homes for as long as 100 days.

In the capital of Beijing 2,700 km (1,678 miles) away, some residents under lockdown staged small-scale protests or confronted their local officials over movement restrictions placed on them, with some successfully pressuring them into lifting them ahead of a schedule.

A crucial spark for the public anger was a fire in a high-rise building in Urumqi that killed 10 on Thursday night, whose case went viral on social media as many internet users surmised that residents could not escape in time because the building was partially locked down.

Urumqi officials abruptly held a news conference in the early hours of Saturday to deny COVID measures had hampered escape and rescue, but internet users continued to question the official narrative.

“The Urumqi fire got everyone in the country upset,” said Sean Li, a resident of Beijing.

A planned lockdown for his compound “Berlin Aiyue” was called off on Friday after residents protested to their local leader and convinced him to cancel it, negotiations that were captured by a video posted on social media.

The residents had caught wind of the plan after seeing workers putting barriers on their gates. “That tragedy could have happened to any of us,” he said.

Saturday evening, at least 10 other compounds lifted lockdown before the announced end-date after residents complained, according to a Reuters tally of social media posts by residents.

A separate video shared with Reuters showed Beijing residents in an unidentifiable part of the city marching around an open-air carpark on Saturday, shouting “End the lockdown.”

The Beijing government did not immediately respond to a request for comment on Saturday.

Dali Yang, a political scientist at the University of Chicago, said the comments from authorities that the residents of the Urumqi building had been able to go downstairs and thus escape was likely to have been perceived as victim-blaming and further fuelled public anger.

“During the first two years of COVID, people trusted the government to make the best decisions to keep them safe from the virus. Now people are increasingly asking tough questions and are wary about following orders,” Yang said.

China defends President Xi Jinping’s signature zero-COVID policy as life-saving and necessary to prevent overwhelming the healthcare system. Officials have vowed to continue with it despite the growing public pushback and its mounting toll on the world’s second-biggest economy.

China said on Friday it would cut the amount of cash that banks must hold as reserves for the second time this year, releasing liquidity to prop up a faltering economy.

The next few weeks could be the worst in China since the early weeks of the pandemic both for the economy and the healthcare system, Mark Williams of Capital Economics said in a note this week, as efforts to contain the current outbreak will require additional localized lockdowns in many cities, which will further depress economic activity.

For Friday, the country recorded 34,909 daily local cases, low by global standards but the third record in a row, with infections spreading to numerous cities, prompting widespread lockdowns and other curbs on movement and business.

Shanghai, China’s most populous city and financial hub which endured a two-month lockdown earlier this year, tightened testing requirements on Saturday for entering cultural venues such as museums and libraries, requiring people to present a negative COVID test taken within 48 hours, down from 72 hours earlier.