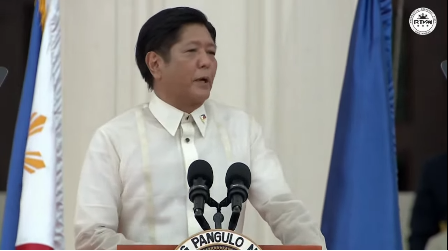 Pres. Ferdinand Marcos Jr. during his inaugural speech at the National Museum. Image from PCOO / Facebook

MANILA, Philippines — Newly sworn-in President Ferdinand “Bongbong” Marcos Jr. on Thursday vowed to fix the government’s shortcomings in its pandemic response, saying there will be “no more secrets” in public health.

In his inaugural speech at the National Museum in Manila, Marcos said he is speaking from his bout with COVID-19, saying he was among the first in the country who got infected with the coronavirus.

He said his administration will fix the shortcomings “out in the open.”

“There were shortcomings in the COVID-19 response. We will fix them, out in the open, no more secrets in public health,” Marcos said.

He also promised that the Philippines would not be “caught unprepared, under-equipped, and understaffed to fight the next pandemic.”

“To start with, we never got over the pandemic of poor, if any, free public health. The last major upgrade of our public health system exemplified by the resources poured into PGH predates the current shambles by three generations,” the new President said.

He also noted how medical workers, including workers, seek opportunities abroad because the Philippines “cannot pay them for the same risks and workload that we have back here.”

“Our nurses are the best in the world, they have acquitted themselves with the highest distinction abroad, having suffered even the highest casualties with the same exemplary dedication. At home, they just got by,” Marcos said.

“They are out there because we cannot pay them for the same risks and workload that we have back here,” he added.

The challenging situation, however, will change, he said, pointing out that he has chosen migrant workers advocate Susan “Toots” Ople to lead the newly created Department of Migrant Workers.

“There will be changes starting tomorrow. I am confident because I have an Ople in my Cabinet,” he said.

‘Ready for the task’ Marcos: ‘We do not look back, but ahead’